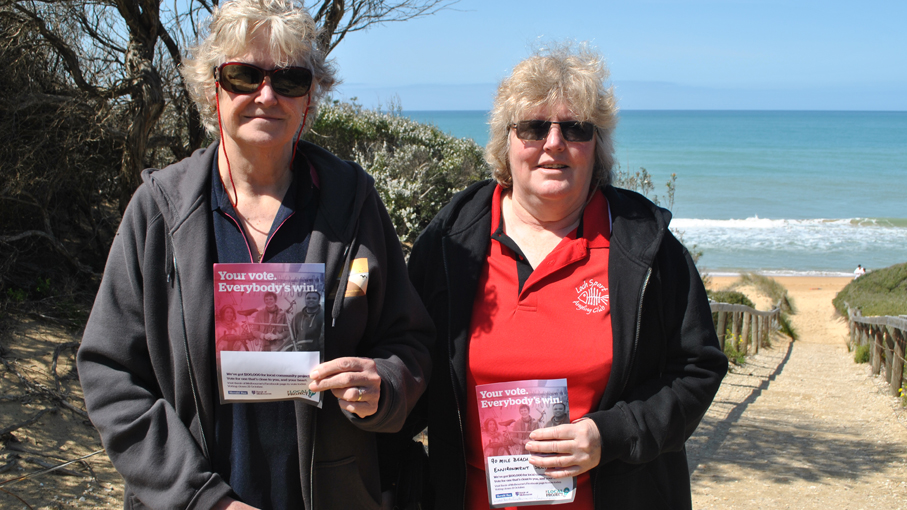 LOCH Sport residents could benefit from wheelchair friendly access to the 90 Mile Beach, but need community votes to obtain the final funding needed.

Through the generosity of the community, Loch Sport Angling Club has almost achieved its fundraising goal of $100,000 for its project to provide better access to the 90 Mile Beach.

As part of its The Local Project initiative, the Bank of Melbourne has $100,000 to fund 10 initiatives which benefit communities, split into education, community, culture, environment and recreation categories, with the top two place getters in each category to receive funding.

If successful in obtaining enough votes to win its environment category, the angling club will have enough money to complete a 130 metre recycled plastic walkway with a gradient that will allow beach wheelchair access.

The walkway will begin behind the public toilets, and continue right to the surf.

Competing against four schools in the environment category, angling club secretary Eleanor Thomas said the club needed all the support it could get.

“There are three different projects in Gippsland, but we are in different categories, so we can vote for each other which is good,” she said.

“There are four schools and they don’t go back to school until Monday (yesterday); they are still to vote, so we need all the help we can get.

“If we get enough money left over (from The Local Project funds) after completing the ramp, we hope to build a little platform for people in wheelchairs to view the ocean and watch the whales swim past,” she said.

“We are hoping, as a second stage, to get enough money together for an all-terrain wheelchair.”

“Councillor Darren McCubbin fell on his bum getting back up it; he asks us not to remind him of that,” she said.

“Given the average age of people in Loch Sport is 65, a lot have difficulty getting to the beach,” Loch Sport Angling Club member Sharyn Lawrence added.

“It’s the holidays and you see a lot of families, and they really struggle with their prams.

“We also get a lot of fishermen and if they catch a four foot gummy shark, it’s difficult dragging it back up.”

Initially receiving a grant from Fisheries, Mrs Thomas said the whole town had got behind the project with the Lions Club, Country Fire Authority, Senior Ctizens and Community Representative Group all fundraising, and several businesses had placed donation tins on counters.

A Loch Sport citizen even arranged their own raffle, donating $2000 to the cause, while the Loch Sport Marina Hotel will donate proceeds from its raffles and Calcutta fundraiser.

“A local has painted a picture of the current access and we will probably raffle or auction that,” Mrs Thomas said.

“Everyone has done their bit.”

“Loch Sport has a population of 400, so the people have done very well,” Mrs Lawrence added.

Lions Village in Licola is also a finalist in The Local Project in the recreation category.

Having already made a massive effort during the past two years in converting two rundown units into a special needs cabin, the Licola community needs help to finish its efforts.

The village will soon host a large group of teenagers affected by cancer.

Morwell’s Kurnai College is a finalist in the education category, and is hoping to raise money for its human powered vehicle project.

Only Victorian residents are eligible to vote and all voters must have access to the social networking site Facebook, with voting closing on October 21.