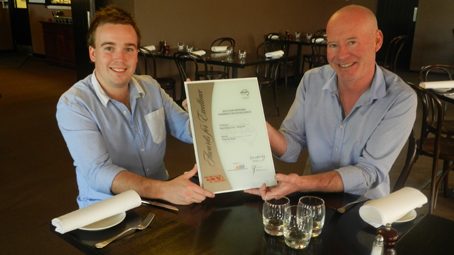 HAVING just been named the Australian Hotels Association best regional restaurant for this year, the management team at the Tinamba Hotel reserves its highest complements for the chef.

While the national excellence award was a testament to all its staff, Tinamba Hotel co-owner Damien Gannon said, in particular, it was in recognition for head chef Paul van Ruiten’s hard work and dedication.

“Paul has been with us since the day we opened four years ago,” Mr Gannon said, referring to himself and co-owner Brad Neilson.

“He’s put in a lot of hard work, developing the menu from day one and forever evolving,” Mr Gannon added.

Mr Gannon said diners were surprised at how intricate the dishes, especially the entrees and desserts, were, adding “some people are just coming here for the desserts because they’re so different and tasty”.

Tinamba Hotel manager Wayne Robinson described the chef’s work as often surprising and imaginative, referring to the different combinations, textures and techniques he used in creating each dish.

“Nothing is an issue for Paul if the power goes out he cooks in the dark,” Mr Robinson said.

Impressed by more than Mr van Ruiter’s menu, Mr Gannon said the judges mentioned the hotel’s use of local produce, its friendly staff and the fact that the hotel was in a remote area as reasons for its win.

Mr Gannon said the hotel prided itself on its use of local produce and wines.

“It’s not just about us, it’s the whole area, and if we can get one extra car of tourists a week to come and spend time in Gippsland and spend some dollars, that’s worthwhile,” he said.

Mr Gannon hopes the recognition the hotel receives from the award will rub off on the region.

“We now get a lot of people travel through from Melbourne who come up this way because they have read about us in the The Age Good Food Guide,” Mr Gannon said.

At the awards ceremony in Canberra last week Mr Gannon said other winners were surprised by how small Tinamba was.

When asked by a man how big Tinamba was, population wise, Mr Gannon replied “about 20”.

“No,about 20”, Mr Gannon said, although admits the town probably has more residents than that.

The hotel qualified for the national award after winning the Australian Hotels Association award for the best country hotel in Victoria last year.

Of the 40 award category winners, it was one of three from Victoria.

There were four finalists in its category.