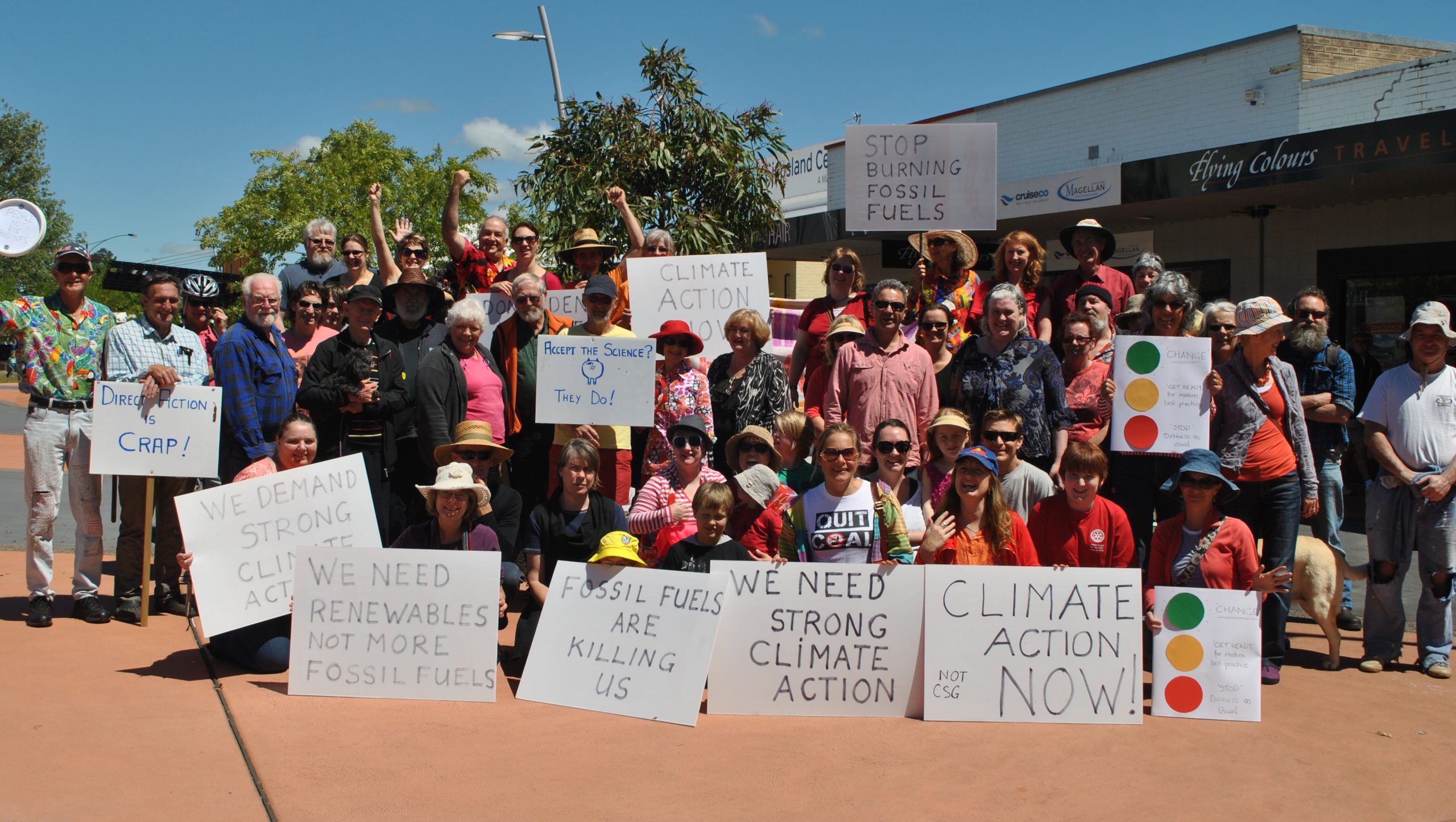 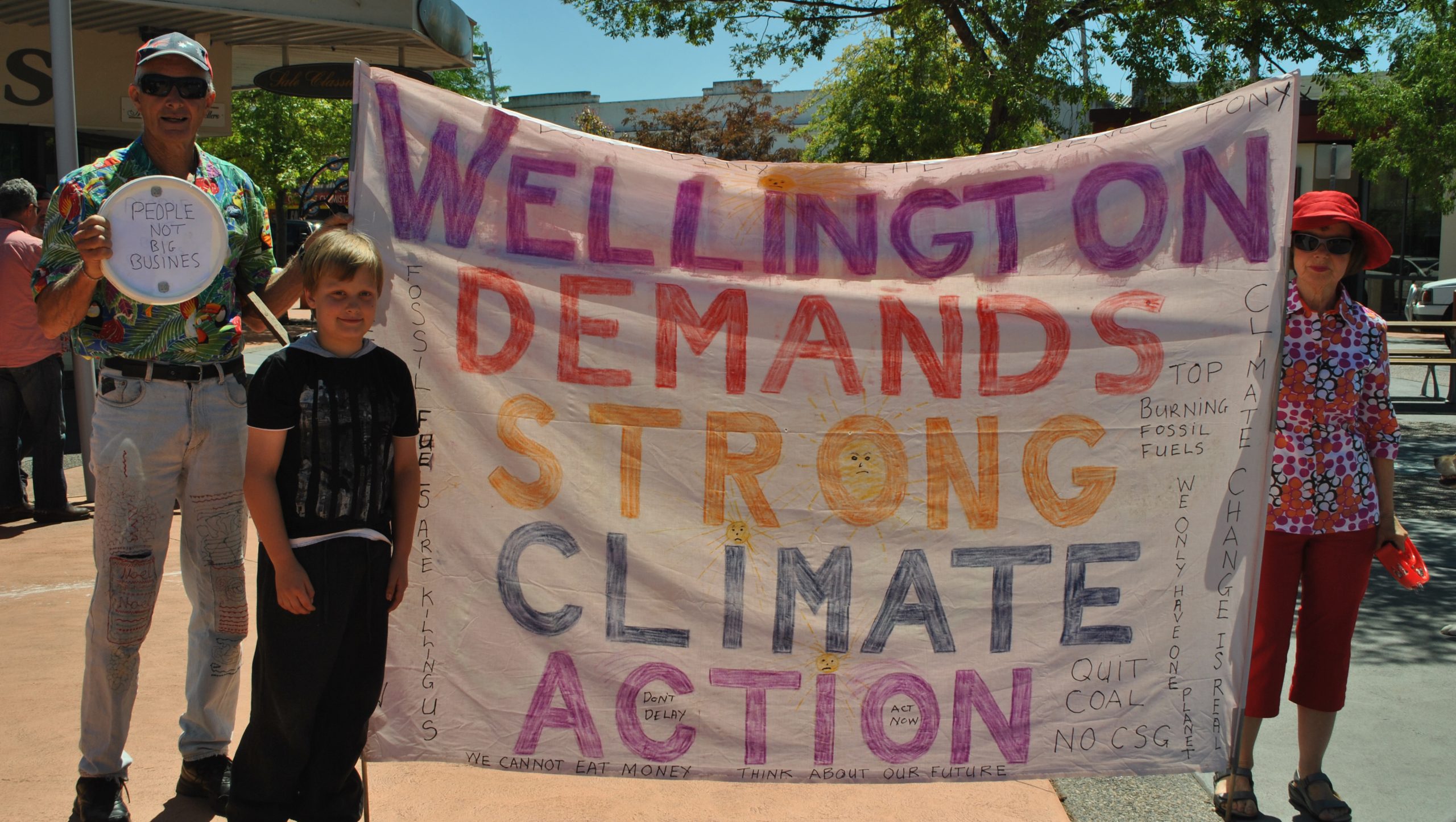 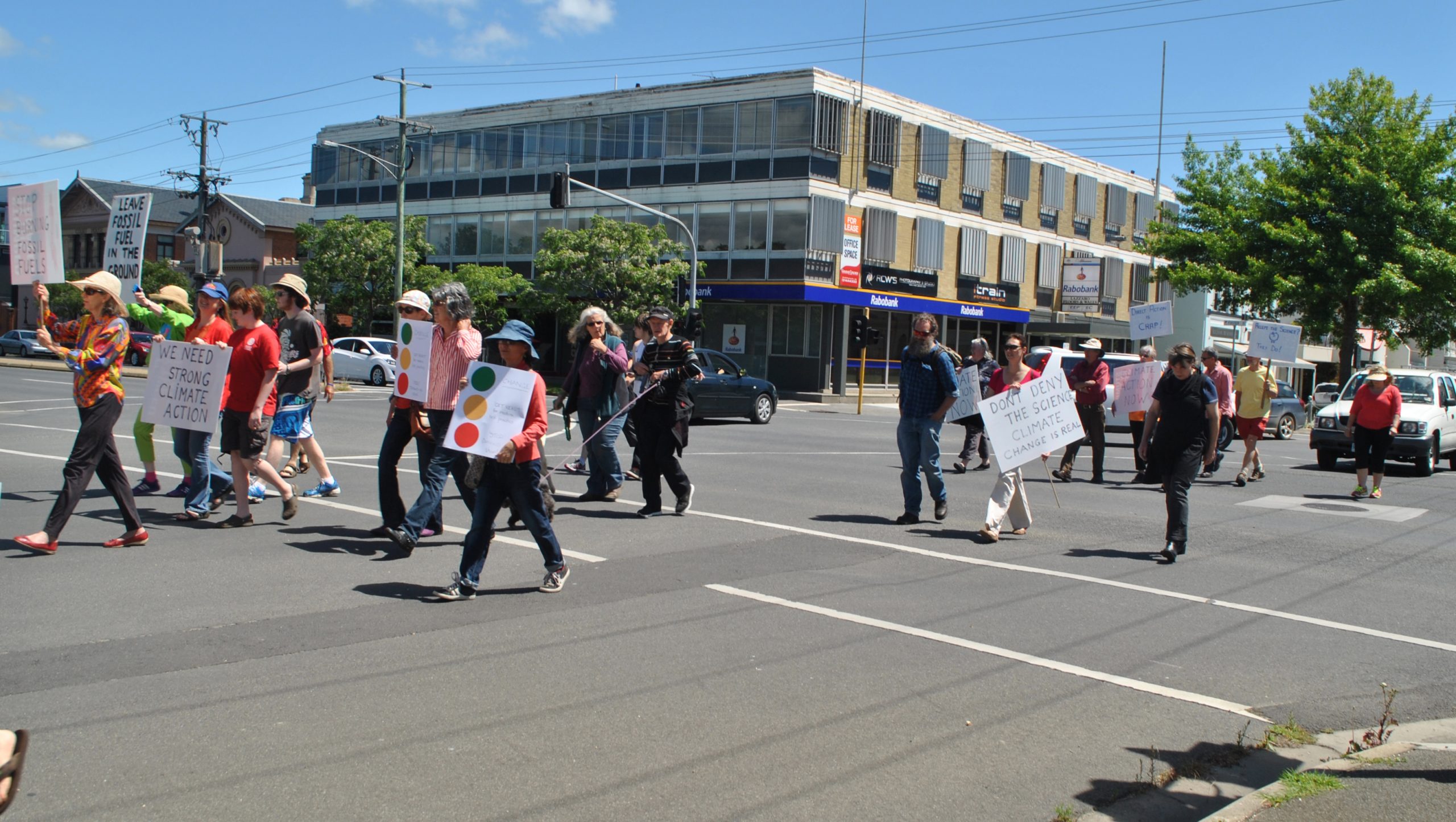 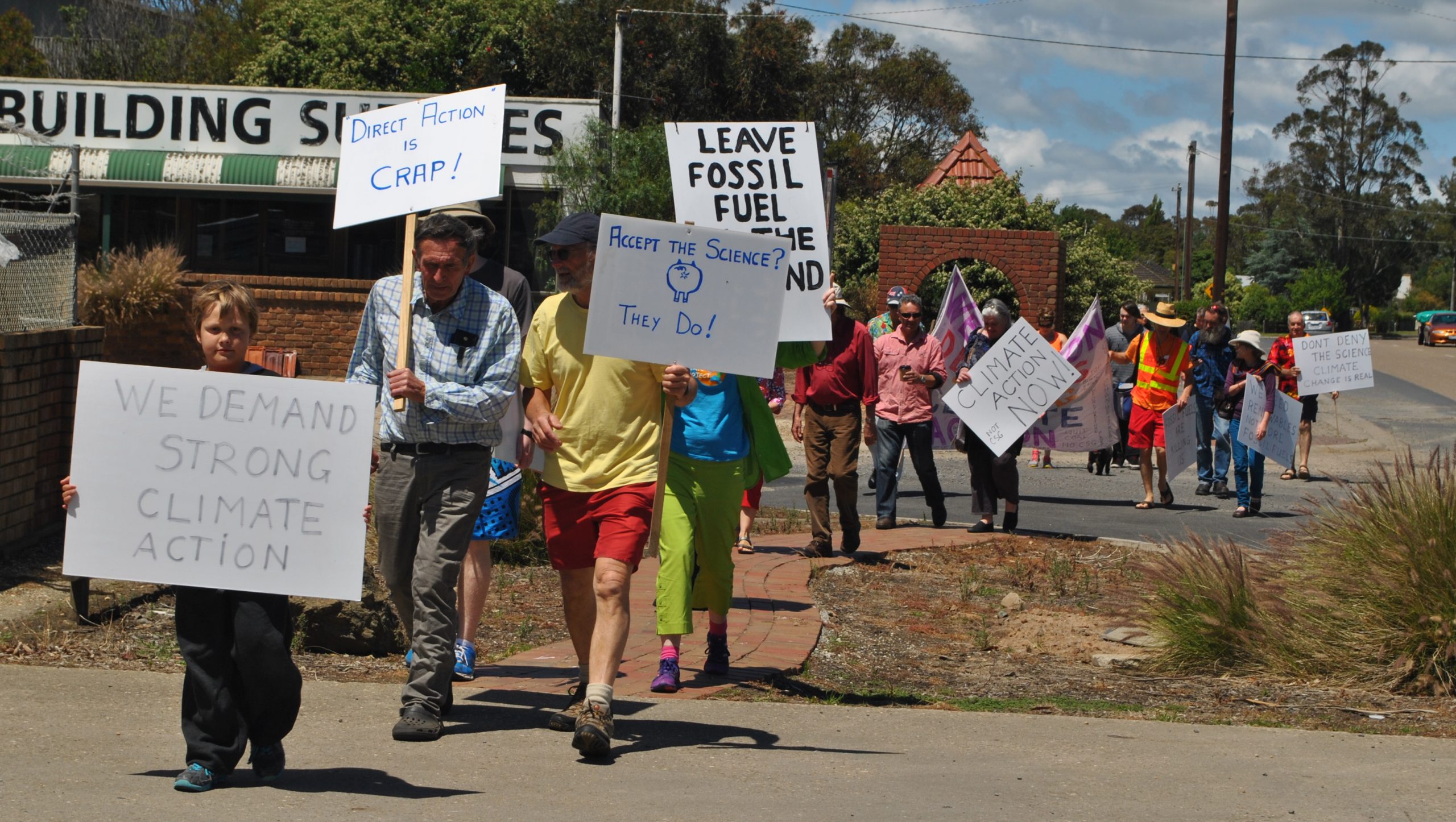 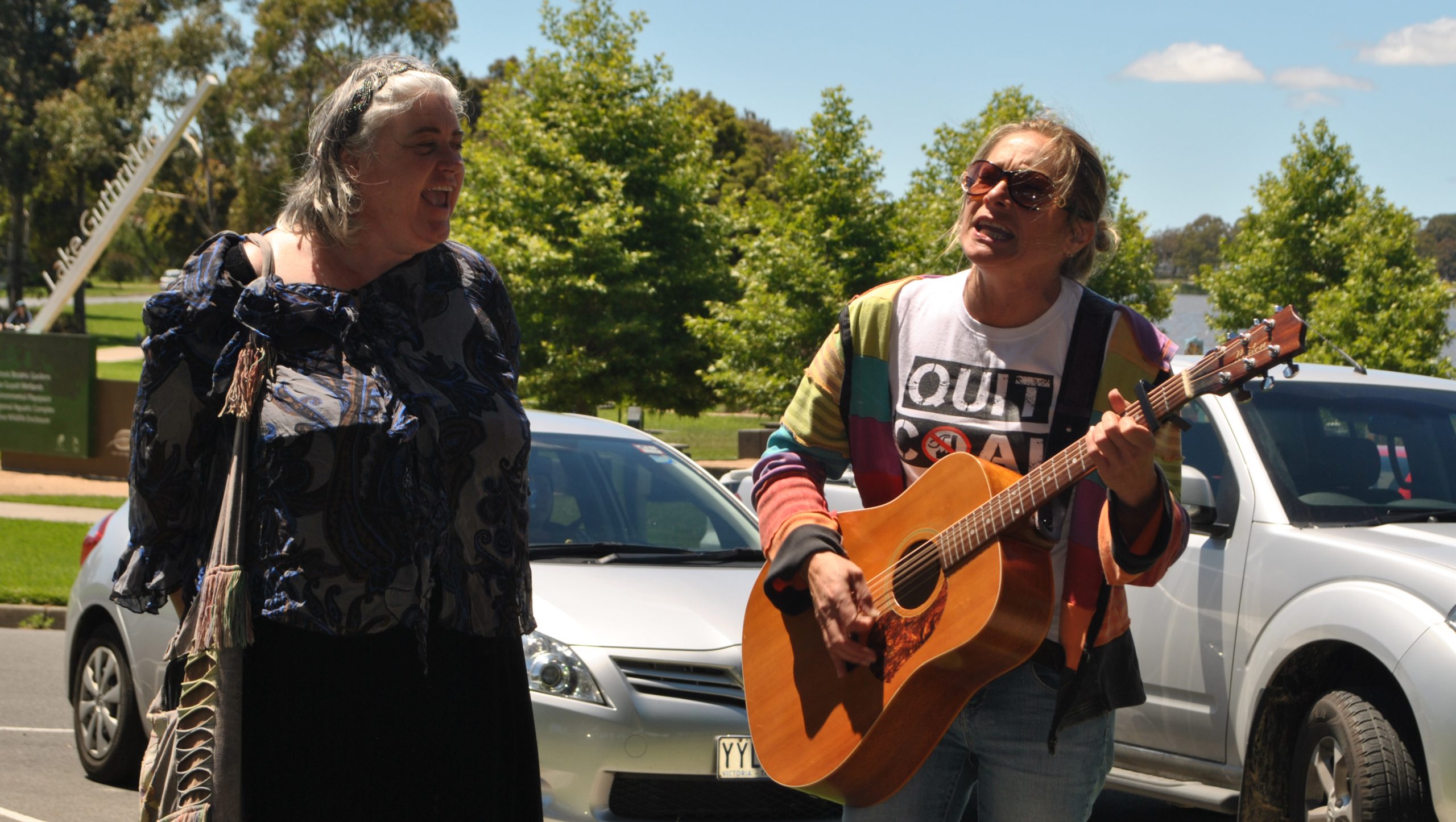 MAKING a stand against climate change inaction about 50 people gathered by the clocktower in Sale on Sunday as part of GetUp! Australia’s Day of Action, marching from the clocktower to Lake Guthridge.

In an attempt to gather more supporters, protesters took their march through the Sunday markets on Sale canal, before heading the back way to Lake Guthridge.

This decision proved counter intuitive, however, with a few stragglers deciding to end their march at the market to enjoy some unexpected bargains, and the main group having to wait for others to catch up.

As they marched down the main street blocking traffic at the Foster and Raymond St intersection the protesters were met with cheers and jeers as cars sped past them offering bitter insults and words of support in equal proportion.

According to local event organiser Rod Horton, Sale, 165 events were simultaneously held around Australia in regional towns and the capital cities as part of the GetUp! initiative.

“It didn’t make sense for people to have to travel to Melbourne, wasting precious fossil fuels when we could just hold an event here in Sale,” Mr Horton said.

“Australia is the highest per person carbon polluter in the western world,” Mr Horton said, attributing man-made global warning as the cause of about 123 major weather incidents last summer, breaking national and global records.

To limit the effects of global warming Mr Horton said politicians from all political parties needed to rise to the challenge, stop debating and come up with practical solutions to climate change, including the shift from fossil fuels to renewable energy.

“I’d like to see people start living sustainably,” Mr Horton said, agreeing with the comments of another protester that two wind turbines placed in the region would generate enough energy to supply Maffra and surrounds with power.

Arranging the event “at the last minute” after discussing the idea at length with friends, Mr Horton said he wanted to see people bring a friend to future events, making them bigger and better as time went on.

“Politicians will only listen to large numbers,” he said, calling for people to attend future events to be posted on the yet to be formed Climate Change Action Sale Facebook page.

As part of the open microphone event a couple of protesters from Geelong and Maffra expressed their views calling on politicians to push renewable energy.

People were also asked to sign GetUp! Australia’s e-petition calling for action, by texting their email address and post code to 0402 662 662. The line should still be open.