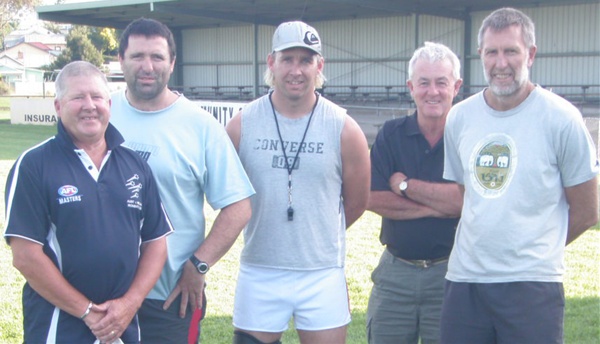 PREPARATIONS for the 2012 Gippsland League season are well underway for the Maffra Football-Netball Club.

Hayden Burgiel, who coached the Eagles to the 2006 and 2007 premierships, returns to the senior coaching role after a successful three years for the club under the guidance of Graham Robbins.

The Eagles had an up and down season last year before eventually being overrun by Drouin in the preliminary final at Warragul.

Burgiel paid tribute to the efforts of “Jugga” Robbins and identified some of the key personnel who would continue on to assist with the Eagles’ premiership tilt in 2012.

“Jugga had a great three-year stint, with two premierships and a preliminary final, and I know with the playing group we have and sideline support that has been maintained, we’re set for another shot at a flag,” he said.

“(Chairman of selectors) Terry McConnell, (line coach) Brendan Callahan and (fitness advisor) Gary Pleming have all been heavily involved over the last decade at our club and are keen to see us achieve more success,” Burgiel said.

“We’ve got great people helping out all around this place and giving up their time because they want to make sure it stays that way. Chris Durrant, Tony ‘Doc’ Sage and Stuey Olston are down here every Monday and Wednesday night making sure the boys are well hydrated and injury free, which just helps make my job easier.”

Brother Adrian Burgiel returns in 2012 as assistant coach after a knee injury in the 2010 second semi-final win over Traralgon wrecked his premiership ambitions in that year and the whole of the 2011 season.

“Adrian spent a year watching last year and is really keen to get back on the field and help the boys out,” Burgiel said.

“Dunsy did a great job leading the boys to a flag in the two’s and we hope some of them can take that next step into senior football,” Burgiel said.

The Maffra Recreation Reserve surface has recovered well following the installation of a new watering system, and training continues on Monday and Wednesday nights from 6pm until late March. Netball training is also in full swing on Tuesday’s and Thursday’s from 6pm, with the girls keen to hit the court at full pace in April.

The Eagles will host Morwell in round one of the Gippsland League season on April 14.

Burgiel will continue his role as Gippsland interleague coach, a position he has held for the past three seasons and has helped improved his coaching skills.