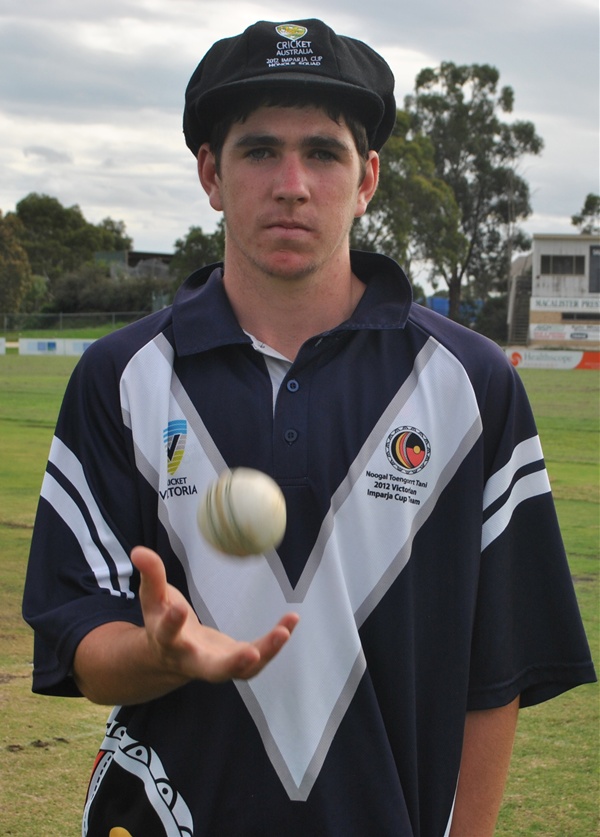 SALE City cricketer Bohdi Walker impressed representing Victoria at the national Imparja Cup in Alice Springs, obtaining selection in the indigenous under 23 development squad which will tour India in October.

The Victorian side came away with a record number of wins for the tournament to finish third, with Walker one of three Victorians receiving a black cap for selection in the all star team.

Since its inaugural game in 1994, the Imparja Cup has grown from being a cricket match between Alice Springs and Tennant Creek to being a national event which embraces the indigenous culture and cricket. Matches are played in a twenty-20 format.

The Victorian team, also known as Noogal Toengorrt Tani, played in the state and territory division.

Walker said he was picked by Cricket Victoria to trial for the side in a practice match.

“I didn’t play Dowling (Shield) this year because I was in South Africa (for football),” he said.

“I was looked at by Cricket Victoria and picked to trial for the Indigenous side.

“We played a practice match at Casey Fields against Papua New Guinea, who are ranked 16th in the world.”

The team flew up to the championships as underdogs, having never won more than three matches in a tournament and the side exceeded expectations this year under the guidance of regional cricket manager Stuart Clark.

Walker was one of three country cricketers selected in the side which also included Newborough’s Troy Oakley.

Walker said he learnt a lot from the senior members of the side.

“I learnt a fair few things off those blokes,” he said.

“I learnt to take my time and bowl on the spot instead of just trying to bowl quick.

“I also got told to keep my composure when I bat.”

Although not getting much of an opportunity with the bat, Walker made solid contributions with the ball, taking 11 wickets for the tournament, picking up a wicket against each opponent except for ACT, where he conceded just 11 runs from his two overs.

Walker’s best bowling came in the loss to New South Wales, where he took 4-23 off 3.2 overs. He also bowled well in the match against Queensland for a spot in the final, conceding just 27 runs off his four overs while also picking up a wicket.

NSW defeated Tasmania in the final.

“We played seven games in Alice Springs and we won five and lost two,” Walker said.

Competing against cricketers with far more experience, Walker impressed tournament officials, obtaining selection in the indigenous under 23 development squad which will tour India in October and was one of three Victorians selected in the all star team.

“There was a gala dinner held at the casino in Alice Springs and first off I got picked in the under 23 Australian indigenous development squad,” Walker said.

“Secondly I got a black cap, which is an Australian team of the best 11 (cricketers) of the week.

“The under 23 development squad goes to India for two weeks in October.

“We will be training and I think we will be playing four games over the week.”