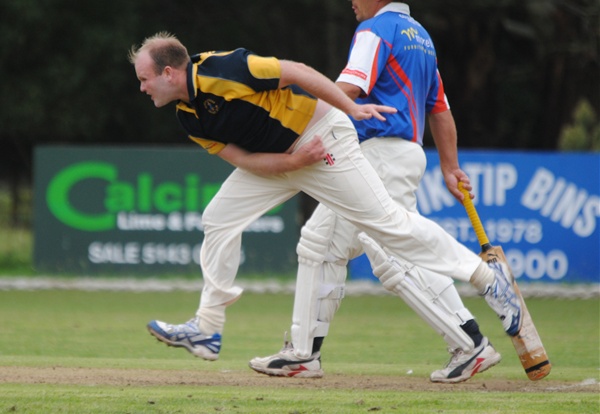 BUNDALAGUAH and Maffra are through to the Sale-Maffra grand final after winning their respective semi-finals over Collegians and Stratford.

The match between Bundalaguah and Collegians was reduced to a 30 overs a side contest after the wet ground was deemed unfit for play on Saturday with the boundary at the northern end of the ground shortened on Sunday.

Collegians captain Stuart Anderson got the early break through before Jason Langshaw combined with Tom Tudor, who top-scored with an unbeaten 75, for a partnership of 88.

Daniel Bedggood contributed 48 in a partnership of 86 with Tudor to see Bundalaguah post the big total of 4-197.

Anderson finished pick of the bowlers with 3-27, while Sam Morelli picked up the wicket of Langshaw.

Trevor Wrigglesworth got the ball rolling for Bundalaguah with the first three wickets, while Sam Bedggood and Matt Dowsett picked up two wickets each.

The Collegians cause wasn’t helped by losing Anderson and Matt Foster to run outs.

Mark Donald was the other wicket taker with 1-14 off his six overs.

AT Maffra, Stratford won the toss and elected to bat, but lost Mick Roberts early, caught behind off the bowling of Pete Roberts for four with the score on 12.

This brought Jack Tatterson to the crease, who combined well with Chris Aurisch and Neil Tatterson in a true captain’s innings of 90.

Josh Davis combined with Josh Rurawhe to dismiss Aurisch with the pair again combining to remove Jack Tatterson with the score on 128.

Neil Tatterson, Lloyd Davies and Sam Bristow all got starts, while Simon Williams finished unbeaten on 31 to see Stratford to the competitive total of 206.

Rurawhe finished pick of the bowlers with 3-49, while spinner Ben Durrant finished the innings with his third wicket, substitute fielder Nick Wozniak completing the catch.

Nathan Magnuson picked up two middle order wickets, while Glenn Semmens and Roberts finished with one wicket each.

Nightwatchman Ben Durrant was the first to go for Maffra on day two and when Pete Roberts followed with the score on 44, Stratford’s in -form bowling attack looked a chance to defend the competitive total. But Maffra’s in-form batsmen combined to cruise past the Stratford total four wickets down in the 75th over.

Cameron, not out on 36, and Semmens, who was unbeaten on 25, saw Maffra through to the final. Jack Tatterson picked up two wickets for Stratford, with Lloyd Davies and Simon Williams picking up one wicket each.