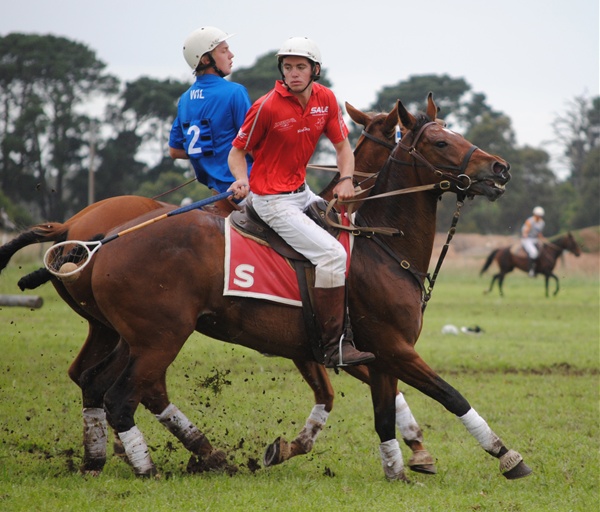 TWENTY-eight teams took part in the Victorian polocrosse championships at Fulham over the weekend.

What a difference two years make. In drought years it was hard to pick up the horses for the dust, but over the weekend the playing fields were soft after steady rain with big rigs towed in by tractor to avoid getting bogged in the soft going.

After meetings were abandoned at Moorooduc due to the heat and Ballarat because of rain, local officials were anxious about the state championships weekend, but everything was fine as usual. The well-trained polocrosse ponies revelled in the soft going with play of a very high standard.

Even the eight and 10-year-old juniors thrilled the big crowd with their skill on their ponies. Already with outstanding racquet control, they certainly are the players of the future.

In A grade, Rosedale and Trafalgar were the outstanding teams in the early rounds, before Rosedale avenged its earlier upset loss to win the final, defeating Trafalgar 18-12.

In other A grade honours, Trafalgar’s Josh Robinson won the Gerard Watt Memorial Trophy and Erin Nesbit from Moorooduc was named the best female rider.

The B grade final turned into a goal-for-goal thriller with Sale holding off a very determined Corio to win 11-10.

Kelsey Rowland from Corio was the best horse in B grade with Sale player John Piening winning the best player.

In C grade, Moorooduc had to work hard for its 11-8 win against Corio in another high standard match.

Simon Grey from Corio was the best player, while best horse went to Zac Vines from Moorooduc.

The D grade final was another goal-for-goal thriller. The scores were level at the end of each chukka before Moorooduc defeated Sale 11-10.

In a high standard junior final, Sale held on to defeat the pool team 13-10.

The Saturday night social was a great success with music provided by local band Shock Wave.