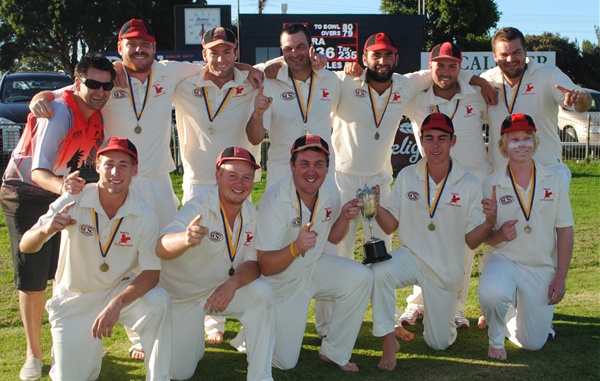 MAFFRA defeated Bundalaguah with four balls and one wicket to spare in a thrilling grand final to secure the 2011-12 Sale-Maffra cricket premiership.

Despite a solid third wicket partnership of 88 between captain Brett Lanigan and Ben Durrant, Maffra slipped to 9-189 with Heath Shingles guiding the Eagles home in a match-winning performance. Shingles, who brought up his half-century with the winning runs, was well-supported by Nathan Magnuson in an unbeaten 47-run stand for the final wicket.

Bundalaguah won the toss and decided to bat first only to slip to 6-66.

Jason Langshaw was the first to go without scoring with Magnuson getting through his defences before Pete Roberts picked up the big wicket of Tom Tudor for just seven soon after.

Josh Tollner combined with Wrigglesworth for a partnership of 20 before Bundalaguah lost three wickets for no run. Tollner was the first to go, becoming the first of Glenn Semmens’ four victims.

Wrigglesworth was next to go, caught short and run out at the bowler’s end after captain Nathan Massey took off for a quick single. When Massey departed soon after, bowled by Durrant for a duck, Maffra was on top with Bundalaguah 6-66.

Matt Dowsett and Sam Bedggood led the Bundalaguah fight back with a partnership of 133 to help set up a competitive total, with Dowsett’s innings of 90 earning him man of the match honours in a losing side. Both batsmen fell victim to Semmens, with solid late order contributions from Aaron Lynch, 16, and Nick French, unbeaten on 10, helping Bundalaguah to 234.

Maffra’s run chase didn’t get off to a good start, losing Roberts caught behind off the bowling of Lynch in the Eagles’ first over late on Saturday with no run on the board.

Promoted to number three, Harry Thackray quickly moved to 12 before the introduction of French paid immediate dividends with Massey accepting his second catch on the way to five dismissals.

Lanigan and Durrant got Maffra back on track with a partnership of 88, but both were dismissed within 11 runs of each other which triggered a mini collapse.

Daniel Cameron was the next to go, caught by Tudor in the slips cordon with some words exchanged following the dismissal after Lynch bumped Cameron on the way past to celebrate with his teammates.

Rurawhe stood his ground one run later after Tudor dived forward to take the catch, but was eventually sent on his way by the umpire with Maffra on the back foot at 6-129.

Semmens joined Shingles at the crease and the pair set about rebuilding, Semmens hitting out strongly and dominating the partnership before catching a top edge with the score on 156.

Josh Davis followed soon after, run out after taking off for a single behind square, only for Shingles to remain at the strikers end to see Davis on his way for a duck.

At 8-160, Bundalaguah was on top, but Shingles found some valuable lower order support to score a half century and see Maffra home.

Tim Bourke provided good support in a partnership of 29 before charging down the wicket to a Dowsett delivery, only to be well out of his ground with Massey completing an easy stumping.

With one wicket to get, Bundalaguah could sense victory with Lynch re-introduced into the attack, looking to pick up his fifth and the final wicket of the innings. However Magnuson provided good support for Shingles in an unbeaten 22, despite offering a couple of half chances with one shot falling just short of a fielder and just making his ground at the keeper’s end after taking off for a gutsy single.

The final overs proved to be tense as Maffra moved in on the required total.

With three runs required in the final over, the match went right down to the wire with Lynch taking the final over after much discussion between the Bundalaguah team. Magnuson picked up a single off the first ball, which opened the opportunity for Shingles, who guided the ball through gully for a boundary to bring up his half-century and secure the premiership.