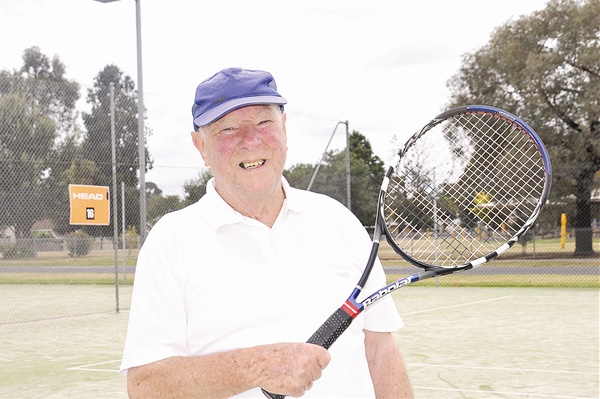 HAPPY go lucky octogenarian Ron Peck can often be found at Maffra Lawn Tennis Association in his Wimbledon whites on a Wednesday and Friday morning, hitting it out with the best of them.

Known at the Maffra Lawn Tennis Association as ‘Ron’, ‘Reg’ or ‘Ronald McDonald’ due to his pleasant smile and disposition, Ron, who turns 84 this year, is a role model of how to age gracefully.

“I’m not going anywhere until I get a telegram from the Queen,” Ron quipped.

Born one of 13 children, he only found out very late in life that his real name wasn’t Ron, but Reg. He has been playing tennis for more than 70 years.

“When we were growing up in Malvern, I was one of 13 kids and we backed onto a park with tennis courts and a park pavilion,” Ron said.

“Dad put a gate in the back fence so we went through there.

“We were always over there.

“It was in the days before television, of course and it was an outlet for us.”

Ron said he began playing social tennis at MLTA when he first came to the area in 2000 and was impressed with the facilities.