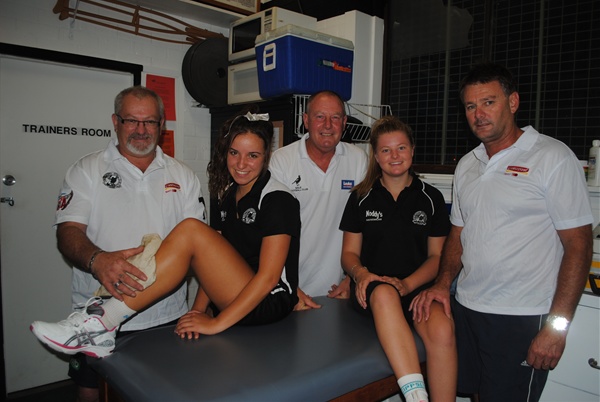 THERE is arguably no more a dedicated group of people at any football and netball club than the trainers.

Trainers are another example of the unsung heroes whose efforts are vital in getting sporting teams on to the ground and courts each weekend of the season.

A Sale Football Club advertisement in the Gippsland Times in 1923 called for “any supporter willing to attend training two nights weekly to rub players down”. Since those early days, clubs have come a long way with many volunteers able to take on the important task.

Sale Football-Netball Club has been fortunate for many years in having a group of hard working trainers available to manage sports medicine at the club.

Legendary trainer “Stinger” Jackman set the scene in the 1950s with his revolutionary methods of injury recovery. Jackman’s work was followed by another Magpie legend in Bruce Cox, who enhanced the trainer’s skills in the early 1980s when training methods were modernised and facilities upgraded at Sale Oval.

The current Sale trainers group is managed by club life member Stuart Thomas, who has been at the club for the past 14 seasons. Thomas is well-respected by the Gippsland League, being president of the Gippsland Trainers’ Association.

During his time as head trainer, Thomas has had to work through the ups and downs of football and netball with premiership wins, the tragic loss of player Peter Hug in 1999, the introduction of netball, formation of the league trainers’ association, and to administer training courses and seminars in order to enhance new trainers skills as well as first aid accreditation.

With four football teams and six netball teams to manage, the trainer’s workload has increased in recent years and the Sale Football-Netball Club is now calling on new volunteers willing to join Thomas and the current Sale trainers group to continue the work. No experience or prior training is necessary; the club has first class facilities and will arrange the training as is necessary.