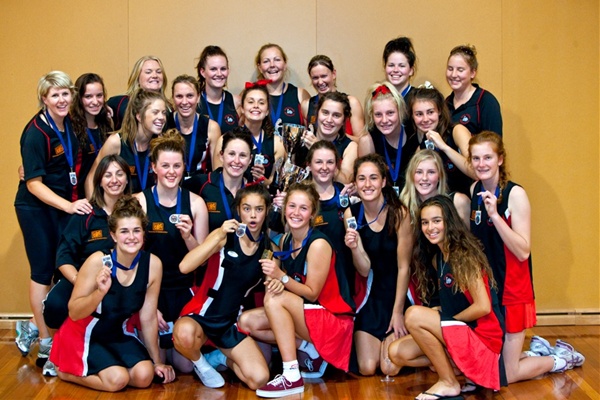 SALE Netball Association scored a premiership double when its open and 17 and under teams won their respective Eastern Region State League grand finals on Friday night at Churchill.

Sale set up its victory in the open decider after out-scoring minor premier North Gippsland Red by seven goals in the first quarter.

North Gippsland made some changes in an attempt to bridge the gap, but normally dependable defender Sheree Wilson and accurate goaler Jaimelee Pearce were unable to hit their straps, combined with the unusually high error rate in the mid court.

Sale increased its lead to nine in the second quarter but was outscored by North in the third by just three.

Sale played a patient and disciplined final quarter as it opted for possession netball to overcome North’s zone style of play. The Sale players were eventually rewarded for their patience, winning the premiership 39-33.

Sale will now prepare for the state play-offs against teams from other regional state leagues to be held in Melbourne on April 29. The two top teams will play at Hisense Arena as a curtain raiser for the Melbourne Vixens match.

Jaimelee Pearce was the hot shot goaler for the season, while Mid Gippsland’s Jess Hillier was named the competition’s most valuable player.

AFTER a shaky start, the favoured Sale 17 and under side settled to have a four-goal lead in the first quarter and continuing on with that lead at the end of the second quarter as Mid Gippsland couldn’t identify the trouble areas.

Montana Holmes was relentless in her efforts to get her hands to as many balls as possible, making it frustratingly difficult for Mid Gippsland to get the ball into their goalers cleanly.

Sale continued to pile on the goals, increasing the margin each quarter. A disappointing display from Mid’s defenders and a lack of variety in the forward line saw Sale eventually take the title for the second year in a row, 49-39.

Holmes was rewarded for her tireless efforts and was named player of the grand final as well as the most valuable player for the competition.

Hot shot goaler for the 17 and under division was East Gippsland’s Chrissy James, who shot at 84 per cent accuracy throughout the season.

FIVE Sale players were named in the all star teams.

From the 17s, Montanna Holmes was named in defence, Tianna Hogan in the mid court and Ella Bertacchini in goals.

Brodie Brunt, mid court, and Ashleigh Robbins, in goals, were named in the open team.