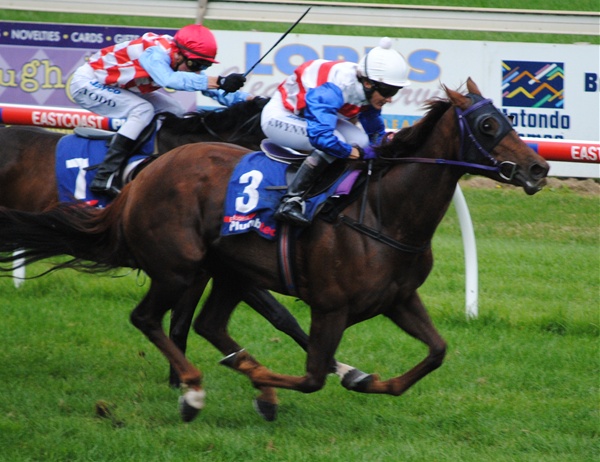 SALE trainer Frankie Stockdale claimed the three-year-old maiden plate at Greenwattle on Sunday with his impressive gelding I Feel Good.

Stockdale and owner Annie Goble had plenty to smile about after three-year-old gelding I Feel Good, ridden by Noel Callow, raced away from the field to score an impressive win. It was the first win for the gelding, who was placed at Sandown in March.

Sale trainers Ian Hutchins and Cliff Murray came close to making it a local trifecta when Danestroem and Haka Brave were beaten in close finishes.

The feature event of the day was race six, the fillies and mares 0-62 handicap, which carried prize money of $50,000 with most of the runners having good form on city tracks.

Cranbourne trainer Dianne Wynn and daughter Sally combined to win the feature event with Sensational Report, a six-year-old mare who has been in great form with wins at Sandown and Moonee Valley and a last start second at Caulfield. This very consistent mare has now won just over $175,000 from six wins and nine placings.

Second-placed Invest, ridden by Peter Mertens and trained at Geelong by Clarry Conners, came off a last start third at Caulfield, while third-placed Blue Nile has won two in a row at Mornington.

In race one, the two-year-old maiden plate, Ian Hutchins’ Danestroem, ridden by Dale Smith, led for most of the journey before being run down by the winner Thunder Rain, ridden by Andrew Mallyon, just before the post. It was the third second placing in a row for the unlucky Danestroem.

Race two winner Miss Beautymate came in under the radar after a last start fourth at Geelong. The four-year-old mare paid $27.50 for the win.

Caulfield trainer Peter Moody and Daniel Stackhouse combined to win the race three maiden plate with Elite Jewellery, who was coming off a second at Wangaratta.

Tower of Lonhro made it three wins in a row by taking out the prize money in race five, the 0-72 handicap. Ridden by Andrew Mallyon, Tower of Lonhro had to work hard to fight off a strong challenge from Haka Brave, trained at Sale by Cliff Murray and ridden by Thomas Sadler.

Noel Callow completed his winning double on Whitten Oval in race seven, the 0-62 handicap. It was two in a row for Whitten Oval, who won at its first start in Werribee.

Peninsula Dane, trained by Matthew Hyland and ridden by Ibrahim Gundogdu, who has been racing well in the city, won the last event, the showcase class one handicap.

It was another outstanding day’s racing, and the next meeting at Greenwattle will be held on Sunday, April 29.