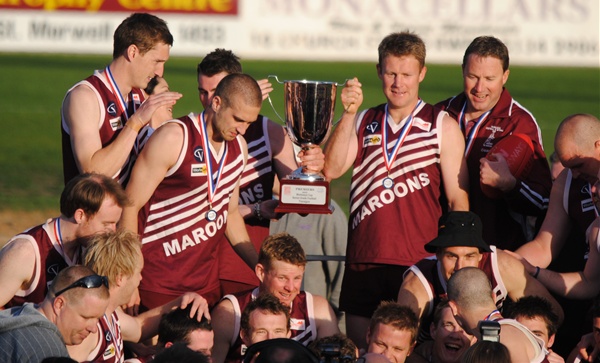 THE 2012 Gippsland League football season will begin this weekend, with hopes of another close competition like in 2011.

Five of the 10 clubs have changed coaches, including Sale and Maffra.

Talk around the traps has been that many clubs are confident of a successful season following strong recruiting, but talk will count for little at the first bounce this Saturday.

HAYDEN Burgiel will have a second spell as Maffra coach, replacing Graham Robbins. Burgiel led the Eagles to the 2006 and 2007 premierships during his three previous season at the helm.

Returning after a season recovering from knee surgery, Adrian Burgiel will be an assistant coach and provide on-field leadership.

Running defender Matt Johnston will join Mornington and young tall Patrick Jones has gone to Norwood in Melbourne, but Matt Lee is back after sorting out his shoulder issues and Kal Killoran is back from Queensland.

Given an opportunity to step up last year due to the absence of key onballers at time, Kel Porter was the only Eagle selected in the league team of the year. He will work alongside the likes of Ben Coleman and Gary Jones in a strong midfield.

The Eagles missed the grand final after being over-run by Drouin during the final term of the preliminary final.

Despite making the preliminary final, last season wasn’t one of the Eagles’ best by their lofty standards, and will be looking for more consistency if they are to be chance of winning am eighth flag in 11 seasons.

HOPES are high of a successful season at Sale under new coach Matt Ferguson, who takes over the role from Nick Anderson.

Dylan McLaren is set to play in round one after a reconstruction on a shoulder he injured in round two last year.

Other additions include Jim Dunnett and Stuart Taylor.

These players come into a squad already including the likes of 2012 team of the year members Kane Martin, Jordan Dessent and Ferguson, who won the league goal-kicking.

The Magpies’ losses are headlined by Peter MacFarlane and Rodney Love with Oliver Collins going to Golden Square, while Stuart Anderson will be a non-playing assistant coach. Jesse Leeds has joined Heyfield.

The Magpies’ season ended on a disappointing note, losing both its finals matches after being in contention for the minor premiership for much of the year. Injuries really took their toll towards the end of 2011, highlighted by Sale’s inability to have fit players in the bench in the second half of its first semi-final loss to Maffra.

Despite hopes he would remaining at the Redlegs, previous coach Brent Cowell will join Croydon.

The Redlegs finished only a win and a half outside the top five in their return to major league football. With a year of experience under their belts at this level, the Redlegs will be looking to be in contention for a place in the finals.

Versatile captain James Gibbs and onballer Luke Dyer are among the players who will be looked upon to help the Redlegs take the next step.

With its under 18s and 16s making grand finals last year, Bairnsdale will be looking to its younger players to step up into the senior side in 2012.

WITH the loss of key players in 2012, it could be a big ask for Drouin to make a third successive grand final appearance.

Reigning league best-and-fairest Andy Soumilas has left the Hawks for Narre Warren, creating a void in the midfield. Darren Jeffreys from Rowville may help to fill that gap, supporting Sam Proctor and Pat McGrath.

Kicking goals could also be an issue with league team of the year member Chris Dunne heading to Queensland, Troy Kneebone to Warragul Industrials and Adam Cook to Montrose.

At the other end of the ground, Aaron Coyle has joined Dromana.

In better news, Bob McCallum will return full time to Drouin after a season with Frankston in the VFL and Glen Bawden is returning after four seasons at Yarragon.

AFTER a largely young side challenged Maffra during last year’s finals, Leongatha was been seen as a premiership contender for 2012, but has had mixed fortunes in recruiting.

Former Richmond player Will Thursfield will coach the Parrots. The 25-year-old will be joined by former Tigers David Gourdis, a defender, and Tas Clingan, a half-back who more recently has played with Wangaratta Rovers.

Spearhead Dwayne Holt returns after a season away, while the Parrots have also attracted Foster goal sneak Jake Best, Nick Eddy from MDU and Michael Otto from Wickliffe-Lake Bolac.

Due to university studies, forward Nick Nagle and midfielder Tom Marriot will play with Eastern league team Norwood, while the Parrots have lost last year’s captain Jack Hughes to Stony Creek and Zac and Jake Griffiths to Coldstream.

COMING off a seventh-placed finish in 2011, Moe could struggle in 2012 under new coach Jason MacFarlane, who most recently coached Morwell.

Full forward Ryan Donaldson and full back Kane Airdrie, two the Lions’ key recruits for last season, will remain at Moe, which will be looking to its younger players to step up.

MORWELL won’t be hoping for a repeat of last year’s terrible run of injuries, which cost it any hopes of making the finals.

Perhaps the only benefit of last season has been the chance to give younger players a run in the senior team. This could give the Tigers more depth.

Midfielder Damian Kerr will coach the Tigers for a second season, but will be without former AFL Tiger Royce Vardy, who has moved back to the Geelong region.

Key defender Julian Blackford has recently undergone his second knee reconstruction in three seasons and will miss the entire season, but captain Michael ‘Funky’ Duncan, who also underwent a knee reconstruction earlier this year, is on target for the opening round. Jack Brown will shoulder a lot of responsbility at full back.

On-baller Jake-Roe Duggan, who had a break-out season this year, has moved to Queensland.

JOSH Jennings will remain at the helm of premier Traralgon, but 2011 captain Sam McCulloch will coach Yinnar, where he played junior football. McCulloch will be joined at Yinnar by midfielder Kane Grinstead-Jones.

Andrew McQualter is a chance to return after snapping his achilles two seasons ago, but former coach Steve Hazelman has announced his retirement from playing.

The Maroons continue to have depth across the ground with Jaime Aitken in defence, Jackson Hall on the wing, Danny Campbell able to play on the ball and in attack and Dan McKenna at full forward.

WARRAGUL will be hoping for an improvement from its past two season, when it was only able to win one match in either.

In his second season at the helm, George Morgan will be wanting his young side to be able to play out the four quarters. The Gulls were dangerous for periods this season, but were often over-run in the final term.

Ben Hughes has returned from the ACT and will be joined by Tom Edwards, who won the Ellinbank and District thirds league best-and-fairest last year with Buln Buln. Denholm Nicholas has also joining from the Ellinbank league.

Nick Edney has returned to Neerim-Neerim South, where he will be joined by ruckman Alex Gavin.

A lot may rest on the shoulders of talls Mark Bradley and Matt Gray.

AFTER blowing a good chance to make the finals last year after losing three of its last four games, Wonthaggi has recruited well for 2012.

The Power has welcomed back Aaron Ware after two seasons with East Fremantle in the WAFL and Phil Young from VAFA club Old Melburnians. He could combine well with Lucas White.

Leigh McDonald will remain coach for a second season.