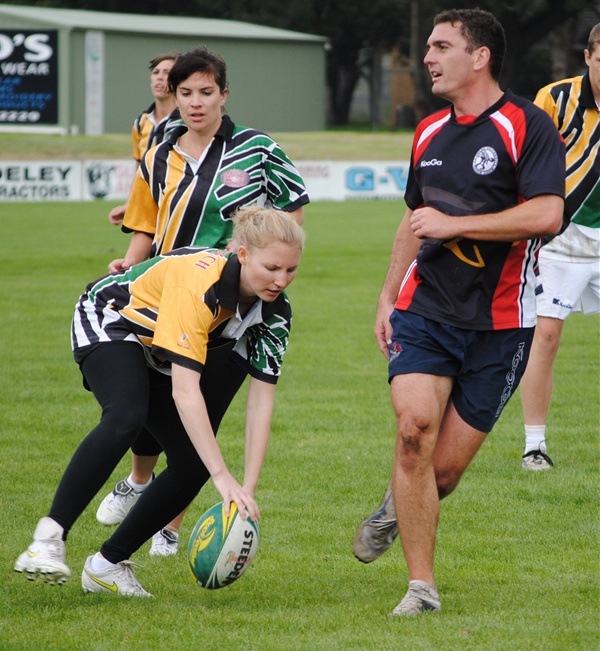 The rain never stopped on the Friday night with organisers thinking the worst, however, on Saturday morning the sun rose on a slightly cool morning with the fields in ideal condition for the Knock-out.

The Sale association was represented in the men’s B grade and mixed social divisions. Bret Towers coached the men’s team to be one of the most competitive teams to represent Sale, while Mel Gascoigne recruited and coached the mixed team with all players showing that the talent is not limited to the bigger Melbourne-based teams.

Cliff Winnett, a level five referee from Melbourne, was referee co-ordinator, ensuring that all games had officials. There were nine non-playing referees while there were 65 games with playing referees officiating.

After flying in from Darwin, John Katal refereed while wife Kerryn ran the office including the PA system.

There were 16 state players in the visiting teams, including MVP awardees Megan Lane and Richard Johnston, who had just returned from Port Macquarie where they were part of the Victorian squad.

The Laurie Smyth Perpetual Award, awarded to a player in the mixed social competition, was this year given to Tom Brand for his sportsman-like approach to the game.

Steve Kemp of the Maori Saiyans was the last entrant into the Knock-out and won the male MVP award for the Saturday competition with his team taking out the prize money.

The Ballarat B grade men defeated Sale three tries to two in a very even contest.

The John Katal Most Valuable Player Trophy was inaugurated this year, awarded in each section. The award was named in honour of Katal’s great contribution to touch in Sale and Bairnsdale as well as state level.