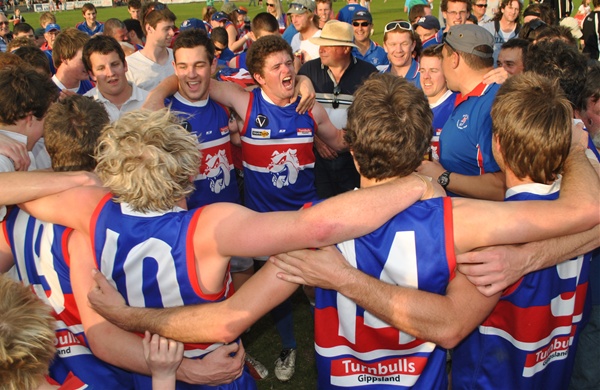 THE stage is set for an action-packed opening round in the North Gippsland Football-Netball League, highlighted by a rematch of last year’s grand final between Sale City and Glengarry.

BOISDALE-Briagolong will once again be placing its faith in youth with a number of kids coming through the ranks destined to make their mark on senior football this season.

Building a base for the club’s success over the next five years, coach Daniel Sandeman has been pleased to maintain the core group of youngsters who he developed in his first year and was quietly confident the Bombers would be more competitive in 2012.

“We want to continue our improvement, our aim is to be better than last season win a few more games and continue to develop the group of players. With the average age around 20 to 21, if we can keep this side together we will see success,” he said.

“I’d really like to position ourselves to be a tough proposition at our home ground.

IT has been an arduous pre-season for Churchill, with coach Tim Darby putting his charges through the hard yards in a bid to redevelop the side’s game plan.

“The coaching panel certainly learnt a lot from last year, we potentially expected too much of the guys so we have made some changes to our game plan in order to better suit our list,” Darby said.

The inclusion of former premiership players Dean Jenkins and Neil Thompson will only strengthen an impressive list.

“We have only lost one player from our top 18 in last year’s best and fairest that being Nic Campbell, premiership players Jenkins and Thompson return and we have about four to six thirds premiership players that would be walk-ups to start in round one,” Darby said.

“The injection of youth will certainly add leg speed which we lacked last season, while our fitness levels are well ahead of the same time last year.”

COWWARR last season enjoyed their year since winning the 2006 premiership.

While the list has had a lower turnover than many opposition clubs, the potential omission of a number of key players may see the Saints left under Cory Bannister.

With the list another year older, the Saints know their premiership window is open right now, and with that comes the expectation of big things in 2012.

AFTER taking his side to the grand final, Josh King has stepped down as Glengarry coach, allowing right hand man Ryan Potter to make his mark on what is a competitive line-up.

Potter was confident that with a solid preseason behind them and a number of new recruits who add depth to the side, the Magpies were set to be again amongst the top of the pecking order.

“Like every side our goal is to play finals, we are in fortunate position that we have a number of kids from our thirds list coming through the ranks who will be blooded into the senior side with several others who are still eligible to play thirds to be given the opportunity to play at the highest level,” he said.

NEW Gormandale coach Paul Richards was expecting big things from his new look side, despite a number of departures, including Sam, Ben and Frank Marks, captain Daniel Domaille and experienced campaigners Paul Rouget and Adam Jaensch.

Perennial finalists over the past decade, the Tigers failed to have an impact last season with Richards pragmatic ahead of the opening round.

“At this early stage of the season I am being realistic, I would expect us to finish around the five to seven mark on the ladder, the inclusions into the side from our thirds line-up and new recruits should see us being more than competitive,” he said.

PLAGUED by injuries at the pointy end of last season, the recruitment of eight senior made players will add depth to Heyfield’s line-up.

The Kangaroos failed to make the finals for the second consecutive season, something unheard of for the proud and something which certainly doesn’t sit well with coach Adrian Cox.

“The club has high expectations we pride ourselves on playing finals footy and know how much it hurts not to be there on the big stage,” he said.

“We have been able to add depth to the club through our recruitment, if we were to find ourselves in a similar situation as last season we should be able to successfully fill the void left by injuries.

“All I ask of the guys this year is to be better, fitter, stronger and smarter, we have a young list and with that comes inconsistencies.

“As a first year coach last year I didn’t know the players that well, I didn’t know how well they played, where they fitted in best but with that knowledge behind me now my expectations are high.”

AFTER stepping away from the game at the end of the 2010 season, Damien Birss returns to Rosedale, a side he previously coached for three years and took from fifth position through to the grand final in his final year.

Birss has managed to secure a number of the club’s former juniors who add depth to what is an impressive line-up.

SALE City will be keen to begin the season on the right foot against Glengarry at home on Saturday after unveiling its 2011 premiership flag.

The benchmark team of the competition last year and with coach Nick Hider remaining at the helm, the Bulldogs have been widely touted as potential premiership contenders in 2012 and will be hungry to perform in front of a large home crowd.

AIMING to make a return to finals footy for the first time since its 2004 premiership, first year Traralgon-Tyers United coach Daniel Hawking has put his faith in the current crop of players to create success.

“We are trying to improve as a club, TTU has been down for a long time, we took the first steps last year to build the foundations for success and now we have to take the extra step and improve further if we are to be successful,” he said.

“We are a young and enthusiastic side, I have worked on developing a game plan that will suit the guys and have put my faith in them giving them the confidence to go out there and execute our style of game. If we do this and stick to the game plan I know that we can match it with the best.”

NEW Woodside coach Luke Anedda is laying the foundations for continued success by placing his trust in the Wildcats’ youth.

“We are aiming to be competitive week in week out, we don’t want to be blown out of the water during clashes, we want to get to a standard where we play an intense brand of footy for a full four quarters,” Anedda said.

“I have played in young sides before, I know how hard it is to keep the side up and about each week but I am confident that by focusing our efforts on our youth that we will establish future success for the club.

“Developing the club’s juniors will, if we can keep the side together, hopefully lay the foundations for success like Sale City has seen, we are very much modelling our thinking on what they have achieved.”