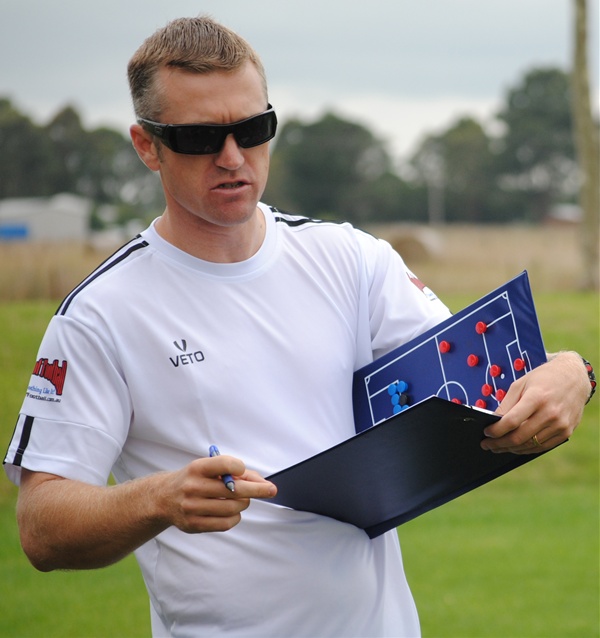 THE Gippsland Soccer League season begins this weekend with Sale United heading to Newborough to play Monash on Sunday.

After the closest GSL season in the league’s 60-year history, 2012 promises to be just as thrilling.

Coach Luke Cheney: “We are aiming to build on a fantastic second half to 2011 and we want to go one better than our eventual second place last year. To miss out on the championship by four goals really hurt and the guys are focused on every match this season and we know we can’t lose focus if we want to win the title. We are confident of a good showing in 2012 but we are also respectful and wary of all our opponents.”

Coach Mauro De Luca: “Despite the loss of several senior players, we feel that the recent additions have more than made up for this. We are aiming to develop a lot of our junior players by integrating them within the senior set up which in itself has created a buzz of excitement on the training ground. Also, there are now opportunities for those who have developed in the reserves to get their chance, and we are definitely looking to build the future of this club.”

Coach Ben Cassar: “Though we have lost top quality experienced championship players from last season, I believe that the club has recruited well over the off season. Promoting from within and gaining new players that will enable us to cover those positions for the 2012 season. We are working hard to mould these players into a very competitive team in 2012 with the emphasis on fitness and placing players into the best positions that suit my planned team structure.”

Coach Lee Dastey: “Having finished seventh in the last two seasons we are looking to be more competitive week in, week out with the aim to be in a position to challenge for a top four position towards the end of the season. All indications so far are that very little separates many of the clubs, so a top four position won’t come easy. The club celebrates its 60th anniversary this year therefore it promises to be a big year on and off the park.”

Coach Eamon O’Hare: “We’re quietly confident of another good season. Our pre-season although being unspectacular, the lads have shown tremendous commitment, particularly the young ones. If we can stay injury free and the likes of Chris Noppert, Adrian Iacovou and Ryan Semple can return to 100 per cent, then we have a list capable of fulfilling our goals.”

Coach Steve Heywood: “I’m excited to build on the foundation laid last season and continue the push into the top four. There are still areas that need improvement in our squad but with a solid crop of under 16s coming through from last season. We are excited to see how we stack up against the top clubs in the GSL. Promoting the youth of the club will as always be a focus and we anticipate the introduction of the youth division will only further develop these young men into fully fledged senior players in the GSL for many years to come.”

Coach Ben Cowan: “I’m looking forward to further developing the vast youth component of the senior squad with a goal of implementing a structured game plan to be competitive in each game. The aim is to build on the results of last year and looking at developing a disciplined culture within the squad. Hopefully these minor changes will translate to results and return the club to a higher league table standing.”

Coach Tommy Leckey: “We are confident of at least holding our third place position from last year and maybe go a bit better. We had a great rise from bottom in 2010 and we want to make sure all that work is not in vein. With the addition of some key players the senior depth has been boosted. We’ve also been strengthened with the promotion of a number of players from 2011’s under 16s.”

Co-coach Anthony Collins (with Jonathan Buhagiar): “Last year it was disappointing to miss the finals in such as close season. This year we have recruited extremely well and we feel the additions we’ve made, along with our existing players, will see us right back up the top challenging. We have a great combination of youth and experience and we will be focusing on getting the best out of every squad member so the team is also performing at its best.”

Coach Mark Pavich: “2012 is the 30th celebration year for Tyers soccer club in the GSL. On the pitch, it will be a year of rebuilding our senior squad to establish greater depth. We are focusing on commitment from our players to a strong showing at training and that will then be reflected on the pitch come game day.”