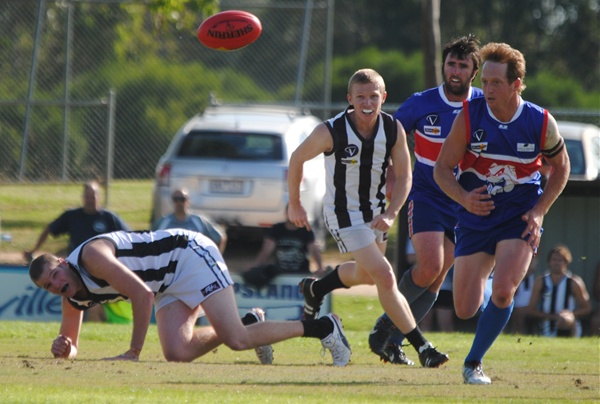 A host of missing premiership players didn’t stop the Bulldogs’ new breed of pups from standing tall to kick start their premiership defence with a 52-point thrashing of Glengarry.

Just after seeing their 2011 premiership flag unfurled, the Bulldogs hit Glengarry hard with a physical 10 minutes of football. The home side dominated the midfield with Josh Tollner, Jake Schuback and Nick Hider providing the side with plenty of drive through the centre of the ground, while Michael Walsh swooped on the loose ball across half-back.

Glengarry’s Matt Royal was able to break through City’s steely defence with the opening goal of a low-scoring first term.

Mitch Bennett ensured that the Magpies felt the effects of poor decision making from a kick-in to kick the Bulldogs’ first major.

With both sides missing opportunities to kick goals, Jake Milham kicked City’s second goal before Shaun Barnes responded for the Magpies to cut the margin by 10 points at the first change.

The visitors opened proceedings in the second term, before Schuback displayed his flair, weaving through heavy traffic to swing around onto his left boot to slot through his side’s fifth goal.

Glengarry responded before the flood gates opened, beginning with some undisciplined play resulting in a 50 metre penalty to gift Tom Wilson a goal.

Tollner’s long bomb into the goal square fell into the hands of Byron Shingles, who sat behind the high flying pack to goal from five metres out.

The Bulldogs led by 33 points at half-time.

The Magpies reeled the margin back in the third term as Josh King began to have an impact in the forward line. However the challenge was quickly halted by three consecutive Bulldog majors.

The Bulldogs young backline, led by Michael Walsh, had a nice blend of nerve and enterprise to it. Tom Bowman was handed the unenviable assignment of holding King at bay and did well to hold him to five goals.

Captain Beau Wilson found plenty of the ball in a best-on-ground performance and was ably assisted by Ben Chivers, who had an uncanny ability to find himself in the right position to drill the home side goalward.

Tollner and Hider dominated around the packs, but it was the club’s younger players who stood tall on the big stage with Bennett, Ton Wilson and Rowan Bell all impressive.

For the Magpies, Bobby Marshall and Chris Panayiotou were solid contributors.

COWWARR held on to defeat Churchill after a nail biting final term.

Trailing by 17 points at half-time, Churchill’s five-goal to three third term cut the deficit to under a major at the final break.

Lee Cooper booted four goals in a best-on-ground performance for the Saints, while Dale Patterson kicked seven goals for the Cougars.

A FIRST half Gormandale blowout handed Boisdale-Briagolong the ideal beginning to its season.

The Bombers kicked four unanswered goals in the opening term, extending their lead to 42 points at the long break. The visitors continued the barrage in front of goal, piling on seven majors for the second half to win by 58 points, 17.9 (111) to 8.5 (53).

The Blues took a three-goal lead in the second term before extending the lead to 48 points at the main break. Rosedale’s momentum wasn’t halted by the break, adding a further 16 goals in a stellar second half.

Mathew Goodwin was the visitor’s best.