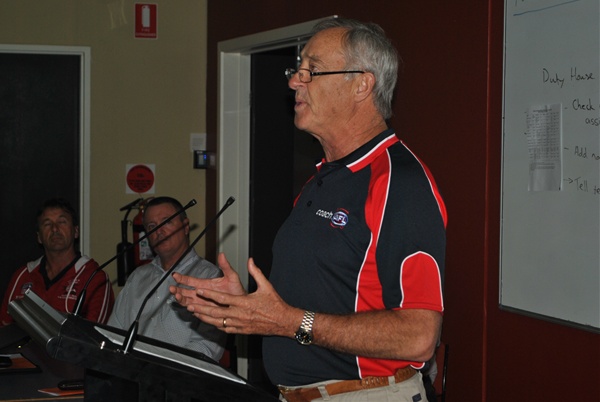 SALE and District Junior Football Association club delegates will next week vote on whether to include a “mercy rule” for matches.

The proposed rule was outlined during the S&DJFA coaches’ night at Gippsland Grammar on Wednesday.

Each club was well represented on the night, with the association executive outlining the rules and by-laws for season 2012, including a proposed new mercy rule to be voted on at the annual meeting on Monday night, after the opening round this weekend.

Under the proposed new by-law, all coaches would be required to ensure all matches are a fair and even contest by endeavouring to have opposing players evenly matched and rotate players around different positions during a match.

In the under 10s, if the margin equals or exceeds 45 points at half or three-quarter-time, the match will be “called” and deemed to be over. Sixty points has been the proposed margin in under 12 and 14 matches, while under 16 matches would be called at 75 points under the proposed new rule.

After the match has been “called”, the scores will be taken as the final result with the remaining time to be played under “friendly” conditions.

The proposed by-law, if passed, would not be in force for the finals.

AFL legend and coaching ambassador Stan Alves was special guest at the evening, speaking about the positive impact his coaches had on his life, both inside and outside of football.