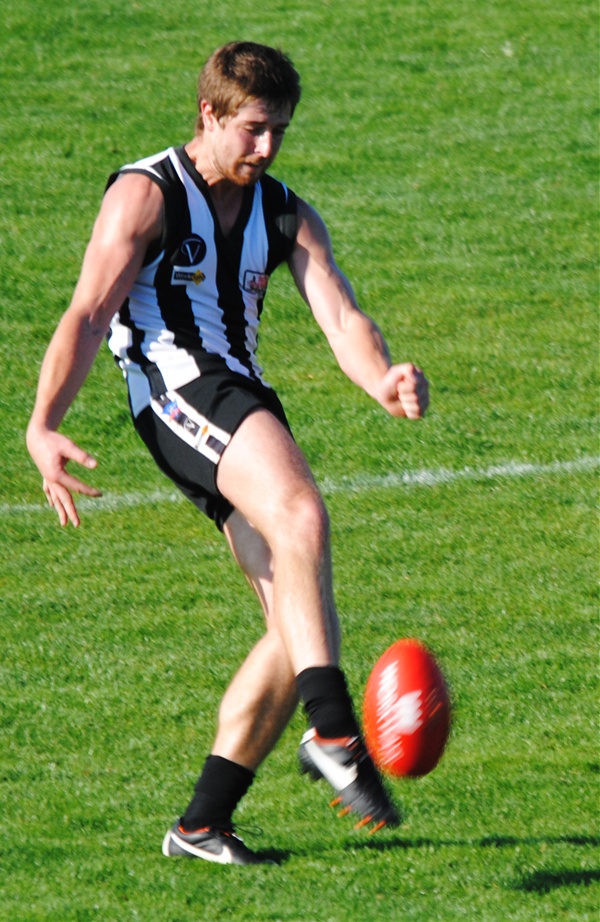 SALE continued from where it left off in round one at Bairnsdale with a big win at home against Moe to move to the top of the Gippsland League footbal ladder.

After copping a quarter-time spray from coach Jason MacFarlane, the Lions responded in the second term, matching the Magpies’ four goals.

Magpies coach Matt Ferguson told his players at half-time their level of commitment had dropped away. The home side responded by kicking 8.3 to one point in the third term.

Up against Ben Morrow, who was named the Lions’ best, ruckman Jack Lipman set up chances for the Magpies’ onballers Luke Collins, Corey Scholtes and Kane Martin, who provided well-directed passes to the forwards.

Ferguson and Kane Fraser, who kicked six goals each, Brenton Martin and John Gooch, three each, finished off the good work down in the midfield.

For years Kane Fraser has been taking courageous marks in defence, now he is doing in attack. He was rewarded for his efforts by kicking six goals.

Shannen Lange, who is on the Gippsland Power list, is a special talent with his pace and ball handling skills. He chipped in with two goals.

Brendan Rathnow and Adam Wallace were busy on their wings, while the back six has developed into a formidable group with Ryan Pendlebury, Jordan Dessent and Chris Laverty turning defence into attack and getting good value for their possessions.

Shane Fyfe, on the last line of defence, had more than 30 possessions.

The Magpies’ reserves, under 18 and 16 teams all recorded good wins.

MAFFRA continued its unbeaten start with a 36-point win at Drouin.

The Hawks were still a chance of victory heading into the final term after both teams kicked four goals in the third term.

Both sides’ shooting for goal was off target in the final term, with the Eagles booting 3.6 to the Hawks’ 1.4.

Daniel Stubbe was a major presence in the forward line, finishing with six goals, while Adrian Burgiel booted three majors.

The win in the seniors completed an unbeaten day for the Eagles on the football field.

Leading by 14 points at the final change, the Tigers booted three goals in the fourth term as the Gulls had their chances to win, booting 4.6.

Rob Michaelides and Tom Crosby were the Tigers’ best, while Ben Hughes led the way for the Gulls, kicking seven goals.

A SEVEN-goal to four first term set up a 31-point victory for Wonthaggi over Bairnsdale.