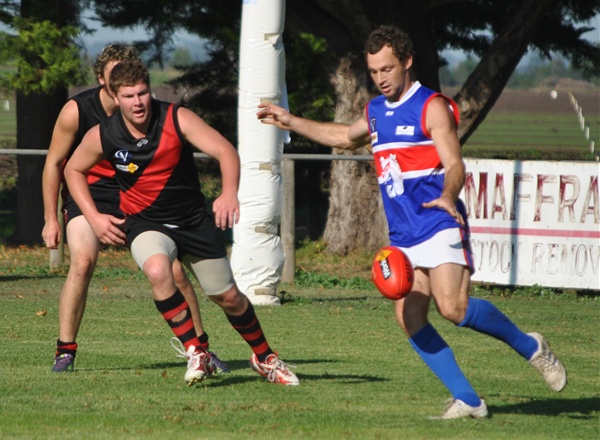 SALE City continues to make an early statement this season with an emphatic 105-point victory over Boisdale-Briagolong.

The reigning North Gippsland football premier has got its season off to a flying start, winning two from two.

After a tight start to the match, the Bulldogs opened up a nine goal-lead at half-time, blitzing the Bombers across the ground despite Jake Schuback being sent from the field for 15 minutes after scuffle broke out in the middle of the Boisdale Recreation Reserve.

The going didn’t get any easier for the Bombers in the second half as the reigning premiers kicked 13 more goals to five to stamp their authority at the top end of the ladder, winning 25.12 (162) to 8.9 (57).

Depite missing on the field for a period, Schuback and Josh Tollner caused plenty of headaches for the opposition’s defence during the match, scoring 11 goals between them.

Jake Milham and Mitch Bennett scored four goals each. In his debut senior season, Bennett also stood out in the first round and is seen as further ammunition to what already is a potent forward structure.

Marty McDonough was adjudged the Bulldogs’ best, with defender Michael Walsh a key across half-back.

For the Bombers, Leigh Fulford and Kyle Ashton stood out, while Danny Pratt kicked four goals.

ROSEDALE was anything but overawed by task of taking on Churchill as Gaskin Park, kicking seven goals to two during the second term to set up a 40-point victory.

Craig Bourne was the Blues’ best, with Justin Emery and Brad Scott valuable contributors. McDermott was the pick of the goal kickers, finishing the match with seven, while Emery kicked six.

HEYFIELD posted its first win of the season, defeating Gormandale by 80 points.

The Kangaroos came out hard in the third term booting six goals to three in an accurate display in front of goals. Jack Woodland and Josh Neille added majors for the term, while Jarrod Barnes and Tim Finch opened their accounts at the opposite end of the ground.

Each time Gormandale, who was missing key forward and coach Paul Richards on the field, challenged in the second half, the Kangaroos responded with ease drilling the ball from the centre bounce through playmakers Jordon McDonald, Dave Kelly and Nic Dowse.

Jesse Bedggood and recruit Michael Delaney kicked nine goals between them, making the most of a Tiger backline missing Steve Burgess and Rob Voss.

Wayne Henry worked hard for the Tigers, whether it be down back or pushing forward, while Toby Callanan worked hard in the ruck. In only his second game of football, Kevin Heenan kept with Heyfield coach Adrian Cox throughout the match.

Whether in the middle of the ground for in the forward line, King was dangerous, Magpies coach Ryan Potter was a continual threat, Lachlan Little led the backline, while Josh Piper was also impressive.

Sam Hanratty stood tall for the Wildcats, while Ben Johnson and Max Lane worked hard in the contests.

The Bombers’ six-goal to one first term proved the difference as the Saints were left to play catch-up for the remaining three quarters.