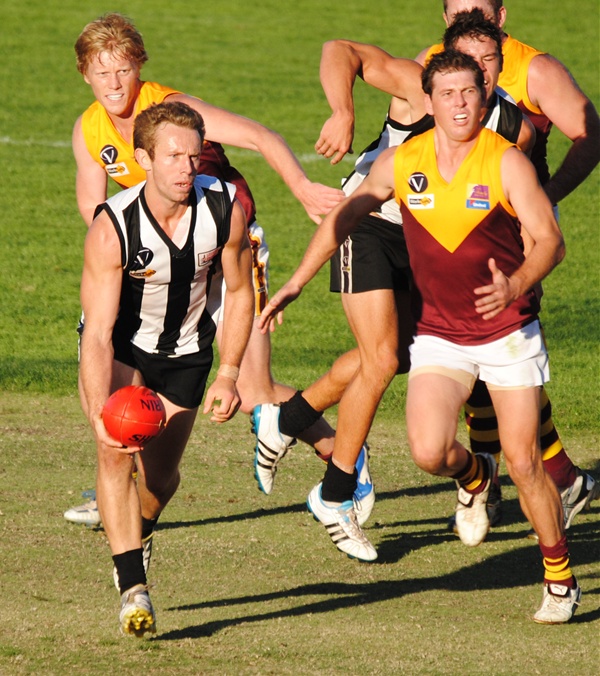 SALE went some way to making amends for its finals thumping at the hands of Drouin last year, defeating the Hawks at home by 95 points to maintain its lead on top of the Gippsland League ladder.

The Magpies booted 6.4 to zero in the first quarter before goals became harder to kick in the second, with the home side leading by 55 points at half-time before it kicked away in the second half to win 17.16 (118) to 3.5 (23).

The main reason the Hawks had trouble scoring was the improvement in the Magpies’ tackling and pressure in most contests. The Magpies were able to get two and three players at the fall of the ball and often the third and fourth Hawks handball ended up in a turnover which resulted in the Magpies racing into the clear to launch attacks.

The kicking has been a feature of the Magpies’ early wins and Saturday was no exception. In one outstanding passage, Lachie Tood, on the last line of defence, broke clear and hit unguarded winger Adam Wallace with a 60 metre pass.

It was great to see Collingwood champion Scott Pendlebury at the game, and he would have been impressed with younger brother Ryan, who is part of the attacking half-back line alongside Chris Laverty and Jordan Dessent. This trio has been troubling out of defence with accurate passing.

The Magpies have been able to play with an open forward line with the ball moving into that zone very quickly before opposing teams could get numbers back. Matt Ferguson (six goals), Kane Fraser (four), Brenton Martin (two) and John Gooch (two) took advantage of well-directed passes into the forward line.

Wallace and Josh Kennedy continued to impress, while Sale has picked up another very speedy customer in Justin Mitrevski, who joins Brendan Rathnow as the team’s fastest off the mark.

The Magpies’ reserves and under 18 and 16s also had a big wins.

LAPSES during the second and third quarters cost Maffra dearly at Warragul, with the home side winning by two points.

The Eagles began well, kicking five goals to two in the first term, but they would be the last goals they would boot until the final term.

Between quarter and three-quarter times, the Gulls turned a 12-point deficit into a 21-point lead after kicking 7.3 to the Eagles’ 10 behinds. It was their inability to convert shots into goals which eventually lead to the Eagles’ downfall.

The Eagles did mount a fight back in the final term, kicking six goals and reclaiming the lead, but the Gulls were able to boot three majors and be in front when it counted, at the siren, winning 12.8 (80) to 11.12 (87).

The Eagles, who were missing injured midfielder Kal Killoran and ruckman Brent Connelly, were reliant on Kel Porter, Gary Jones and Patrick Walker to move the ball out of the midfield.

Full back Sam Bristow was the Eagles’ best, leading the defence against the tide of Gulls pressure. Daniel Stubbe presented a target, while Daniel Bedggood kicked four goals.

For a team which took all season to notch up their solitary victories in each of the past two seasons, the win on Saturday is sign of the Gulls’ improvement.

Clinton Rowe and Brad Nott showed pace along their wings for the Gulls, Brad Drew and Matt Gray troubled the Eagles, while Darcy Brown and Ben Hughes kicked three goals each.

The Eagles could only manage one win for the day on the field, in the under 16s.

LEONGATHA was too good for Morwell at home.

Adam Bailey and Tom Crosby were the Tigers’ best.