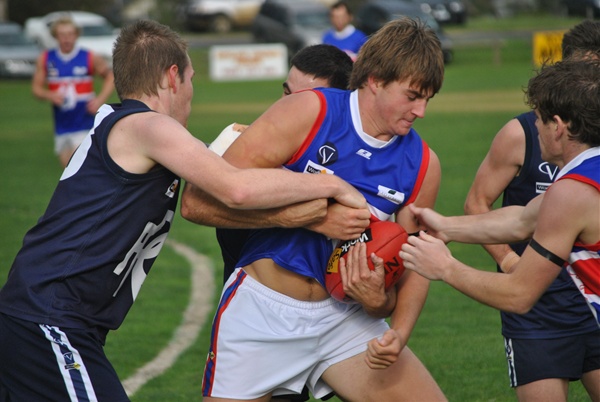 ROSEDALE enhanced its status as the North Gippsland football’s big improver with a 27-point triumph over reigning premier Sale City.

Rosedale contained the visitors in a tight first half with three points separating the sides at the main change. The Blues then overpowered the Bulldogs with a stunning quarter to create a five-goal lead at the final change.

The Blues hit their straps early, slamming on three goals during a frenetic opening 10 minutes as the visitors were left flat-footed.

But it didn’t take long for City to steady, with youngster Nick Grainger opening its account with his first of three goals. The Bulldogs settled as the pace of the game lost its intensity, adding two goals to level the scores before consecutive late goals to Schuback saw the reigning premiers take the lead ahead of quarter-time.

Jon Cantwell had the better of the ruck contests against Marty McDonough as he fed midfielders Chris King, Daryl Mayman, Dale Fleming and Justin Emery with first bite of the ball. Winning the opening clearance of the second term, Brad Cantwell drilled the ball forward to Andrew Flanagan, who out-marked Walsh to score one of his five goals for the afternoon.

Rohan Diamond continued to wear Joel Brayshaw like a glove, before Brayshaw left the field with a leg injury.

The contest between Rosedale’s Fleming and Neville Moyle entertained the crowd throughout the afternoon with the young pup failing to give his older opponent any room. Jack Sellen impressed as he worked tirelessly to contain Emery, who at times appeared to have the ball attached by a piece of string.

Each time City drew away Rosedale responded to remain in touch with just three points the margin at half-time.

As the rain began to tumble down, the heat on the field intensified with a number of scuffles breaking out ahead of the half-time siren.

Rosedale’s seven-goal to one third term buried the contest. Fleming led the charge with the opening goal before Jake Power and Flanagan followed suit as the Bulldogs found themselves failing to move inside their forward 50.

In an attempt to get City back into the contest, Ben Chivers was finding plenty of the ball, while Schuback tried to light up the forward line, but it was all the home side as Fleming centred the ball into the goal square for Flanagan to extend the margin to two kicks.

McDermott made it known that he scored true, getting into the face of City vice-captain Rowan Bell. The jubilation continued for the Blues with an impressive piece of fast moving football seeing Caldwell handpass to Emery, who combined with Fleming on the run to added a second goal in as many minutes.

It took a low grass cutter goal from Schuback late in the term to steady the ship for the visitors.

The final term was a formality with neither side having a significant impact on the scoreboard.

There was plenty to like about the Blues’ performance with their drive through the midfield and off half-back by the likes of the Rohan and Adam Diamond, Scott Johnstone and Dom Keating was unmatched by the Bulldogs. Boasting a multi-prong forward structure with Flangan, Caldwell and McDermott and a hard hitting defence, the Blues are the real deal.

The visitor led by seven points at half-time before the Kangaroos solid third quarter put them 23 points ahead at the final break.

With the wind favouring the Bombers’ scoring end in the final term, many would have questioned whether the three-quarter-time lead would be enough to claim victory, but any doubts were erased when the home side added a further five goals to one to win 12.17 (89) to 5.10 (40).

Nick Dinsdale was best-on-ground for the Kangaroos, with Michael Scott and Daniel Saunders valuable contributors. Jesse Bedggood finished the match with four goals.

Wayne Carmody was the Bombers’ best.

The Saints slammed on six majors to establish a four-goal lead at quarter-time. The Wildcats challenged, but it was Cowwarr’s nine-goal second term which killed the contest.

The Saints’ midfield depth proved to be the difference with Brett Street, Simon Ferguson, Pat Tainsh and Jordon Bourke creating plenty of play, announcing to the competition the Saints are back. The home side had 13 individual goal kickers, with Brad McBride leading the pack with four.

Ryan Foat and Matt Lane continued their strong form for the Wildcats.

A 10-GOAL to three first half was the impetus for Churchill’s away win against Boisdale-Briagolong.

The Cougars kicked five goals to one in the opening term. The script continued along the same way in the second term, led by Dale Paterson and Alex Tatterson in front of goal, as the Cougars booted five more majors to take a 47-point lead into the main break.

Michael Higgins was a stand-out, while ruckman Andrew Brown was a solid contributor.

Justin Dingwall was instrumental on the Bombers’ last line of defence, working hard to contain the Cougars’ many avenues to goal, while John Burge booted five majors for the second week in a row.

THERE were plenty of celebrations on Sunday when Glengarry took the honours in the Mother’s Day clash against Gormandale and marked Trevor May’s 400th club match in style.