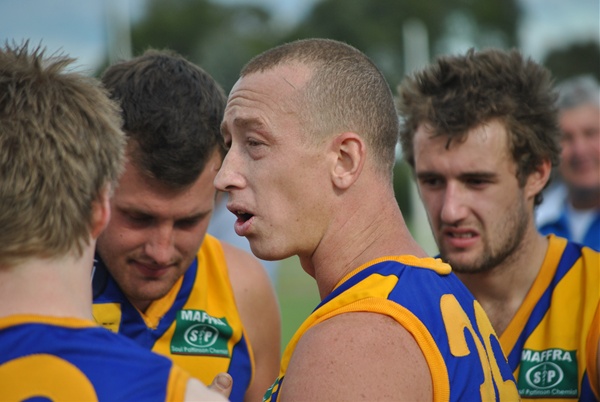 GLENGARRY will host Heyfield in the match of the round six in North Gippsland football.

The Kangaroos will be without the playing services of coach Adrian Cox, who accepted a one-match suspension for striking last weekend.

The Magpies’ fourth straight victory on Sunday sets up a tantalising contest against Heyfield, who has claimed the scalps of Gormandale, Boisdale-Briagolong and top five side Traralgon-Tyers United.

A fifth straight win against one of the competition’s movers and shakers may act as the barometer for the Magpies’ assault on the 2012 premiership.

Expect a high quality contest, which may see the sides’ forward lines pitted against one another in old fashioned shoot-out.

COWWARR must maintain its momentum if the Saints are to level their season ledger at 3-3 when it hosts Boisdale-Briagolong, which can do the same if it wins.

The Saints bounced back from a tumultuous fortnight with a crushing 109-point victory over Woodside.

The Bombers can’t afford to give the Saints a start, just as they did against Churchill, otherwise they will again be relegated to playing catch-up football.

Kicking 10 goals in the past two matches, Bomber forward John Burge has proven to be a focal point in the forward 50 arc, along with Nicoll Sandison, who have combined with Danny Pratt to kick a season tally of 32. The Bombers will need their forward line to be firing on all cylinders if they are to win.

IN other matches, ninth-placed Woodside will need to rise to the occasion against a red hot Rosedale as the Wildcats search for their first win of the season, Sale City will return home to host bottom-placed Gormandale, and Traralgon-Tyers United will look to dispel thoughts it struggles against quality opposition when it hosts Churchill.