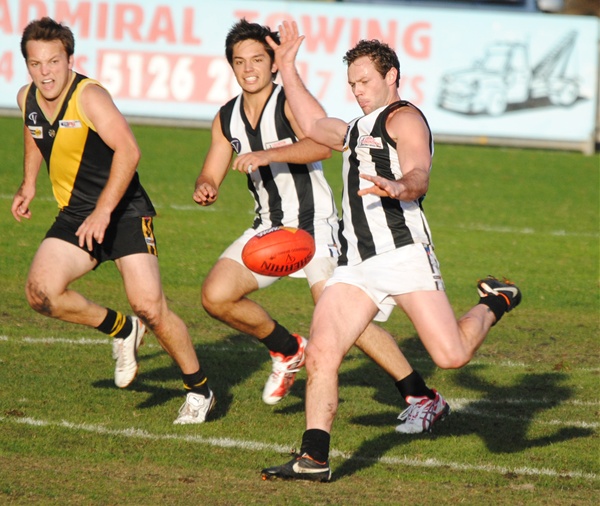 IN the major upset of Gippsland League round six, Sale surrendered top position on the ladder to Leongatha by going down to a more determined Morwell by five points.

Morwell appeared to win more of the contested ball with Rob Michaelides, Jeff Ryan and Adam Bailey prominent around the ground and Jack Brown doing a good job in defence on the league top goal kicker Matt Ferguson. The Tigers’ effort was commendable and gave the Magpies no easy use of the ball.

Sale supporters were disappointed to see the Magpies’ usual brand of offensive play missing as they were unable to apply the pressure that has been evident in their recent matches. This resulted in the Magpie defenders being under constant pressure often resulting in them being caught out of position.

Despite a good start with early goals to Magpies Josh Dunkley, Ferguson and Mitch Davis, Sale was surprised by the home side’s hardness at the ball. Sale’s early tackling was good and the inside 50s were about even, but in a close affair, too many turnovers proved costly for the Magpies.

With Dylan McLaren unavailable, Sale’s Jack Lipman played a solo hand in the ruck and had the better of the centre bounce duels, but the Magpies were unable to win the clearances as they had in previous games. The absence of regular Magpies centre man Luke Collins was also evident, even so Sale’s Corey Scholtes, Kane Martin, Chris Laverty together with youngsters Dunkley and Adam Wallace were good contributors by keeping the Magpies in the game.

In a low scoring game, Magpies’ key position forwards Ferguson finished with five goals and Davis three. However they received little support from the other Sale forwards, whereas Morwell had a good spread of goal kickers with strong marking full forward Michael J. Duncan leading their list with four.

With little between the two sides all day and with the scores level at 8.8 each at three-quarter-time, the scene was set for a torrid last quarter. The loss of Lochie Todd with a hamstring injury during the third quarter put the usually reliable Magpies’ defence under added pressure.

Sale will get back McLaren, Collins and Shane Fyfe for the next game at home against Maffra on June 3.

The Sale reserves were also disappointing, going down by 20 points. The Magpies’ under 18s won by five goals, while the under 16s were far too strong for their Tiger opponents, winning by 108 points.

TRARALGON overcame a dogged Wonthaggi, kicking 10 goals to six in the second half to win by 41 points.

LEONGATHA is the only undefeated team remaining after a big win over Drouin moved the Parrots into top spot.