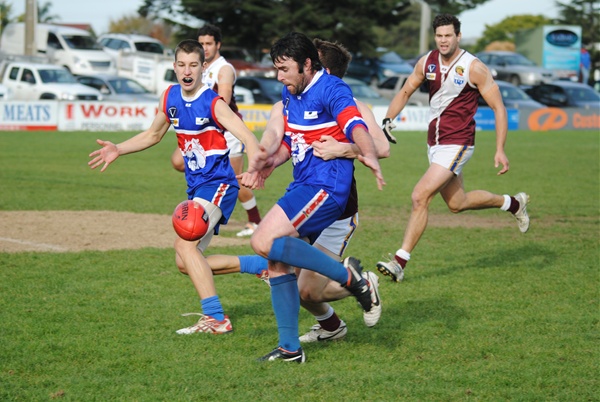 A sluggish Sale City did little to excite former Carlton great Anthony Koutoufides early in the contest against Churchill.

Caught flat-footed the Dogs felt the wrath of the Cougars early as they broke away to a three goal lead before three late goals in the final minutes of the first term handed the reigning premiers a one point lead at the first break.

Led by Jake Schuback in front of goals and Tom Bowman at full back the Dogs settled, to outscore the visitors three goals to one to take a handy 13 point lead at the main change.

The premiership term was an epic contest, the sides going goal for goal, however the Cougars couldn’t eat into the half time margin which would serve City well for the remainder of the contest 16.9 (105) to 12.16 (88).

Bowman was named best on ground for the Dogs, with Christopher Williams a standout for Churchill.

Nine goals from Heyfield’s Michael Delaney, eight from Matt Millar and seven from coach Adrian Cox was the highlight of the fourth placed Kangaroos’ match against Woodside.

Watching their reserve side boot a massive 43 goals, the seniors weren’t to be outdone booting 16 goals in the opening half before following on after the long break with a further 17 majors.

There was little that Woodside could do to halt one of the competition’s in-form sides, which had winners around the ground.

Mat Goodwin and Nic Dinsdale were superb, coach Cox was the general of the midfield and made his mark in front of goals with Nic Dowse a solid contributor.

In a dominating opening term from Cowwarr, the Saints led from the outset in their round eight match against Gormandale.

Sealing their first win last Saturday, the Tigers could ill afford to allow the Saints to dominate early in the contest but that is what happened at the Cowwarr Recreation Reserve.

Led by the fleet footed Jordan Bourke in a stellar best on ground performance in the centre, the Saints were sublime.

Robbie Ferguson finished the match with four majors two coming in the third term, while Matt Learmonth added three to his season tally.

Brett Street taunted his many opponents in a standout performance, Simon Ferguson continued to evolve and Shane Galea set up a number of goals.

The Bombers had little answer to the Blues’ structure, Brad Caldwell led the charge on the scoreboard finishing the match with six majors, Jeremy Reid added five and Ross McDermott added four to his season tally.

There was plenty to like about the Blues’ performance, Justin Emery was explosive in the midfield along with Daryl Mayman, back man Justin Smith let little past him and Darcy Murray was also impressive.

Leading for three quarters of the match Glengarry fell short by a mere three points in a nail biting contest against TTU.

Trailing by two kicks at the final change the Bombers fought hard to remain in the contest. Boasting 10 scoring shots to five for the term TTU’s forwards led by Des Brunt, Dane McGennisken and Dylan Loprese kept the Bombers within reach as the Magpies led by Lochie Little fought hard to hold onto their slim lead.

Bomber ruckman Luke Middleton continued his impressive season form in a best on ground performance while the Graham brothers Chris and Brian were standouts, stepping up when the game was in the balance.