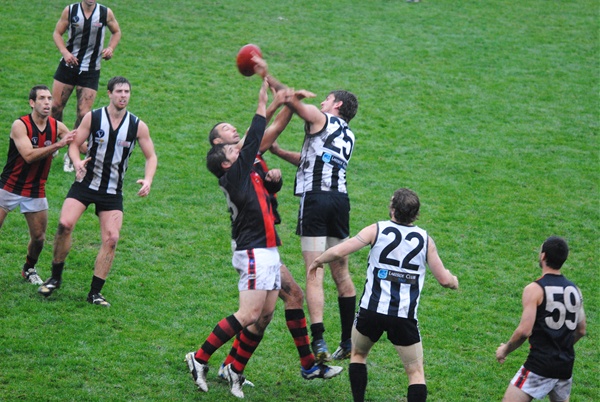 The Sale and Maffra teams trudged off Sale oval at 4.45pm on Sunday drenched and they would have been sore after their tough and physical encounter, in which Sale prevailed by 42 points.

Played in drizzling rain, lights were on at both football and netball in what was a very dismal wintery day and it was a credit to players on both sides that it was still a very good standard with most spectators staying until the final siren.

Wet, slippery conditions are always difficult for the players and not much better for the umpires, with players sliding and tackling, but the umpires did not over umpire the match, helping the game to flow.

Sale coach Matt Ferguson, who was closely guarded by Maffra defenders, did well to kick six goals in the slippery going.

After the match Ferguson paid tribute to his back six led by Shane Fyfe and Chris Laverty, who had good support from Jordan Dessent, Ryan Pendlebury, Joel Wallace and Andrew Quirk.

Young guns from the under 16 team, Josh Dunkley and Bohdi Walker, were cool and showed class in the difficult conditions.

Defender Sam Bristow was good for the Eagles, Ben Coleman is another Eagle who enjoys coming up against the black and whites and he was going just as hard in the closing stages to win kicks as he was in the first quarter.

Moving towards the completion of the first round, the Eastern football neighbours should both play finals.

The Magpies held on to win an entertaining reserves match, kicking 8.12 to 8.4 with Brenton Martin kicking three goals.

Sale’s under 18s kicked 12.17 to defeat the Eagles 4.3 in their best win of the season with Cam Garrett kicking three goals.

In the under 16 match, Sale led early but the young Eagles fought back in the second half with Sale holding on to win 6.10 to 4.7. Jarred Jans and Matt Ogilvie kicked two goals each for Sale and Charlie Driffield kicked two goals for Maffra.