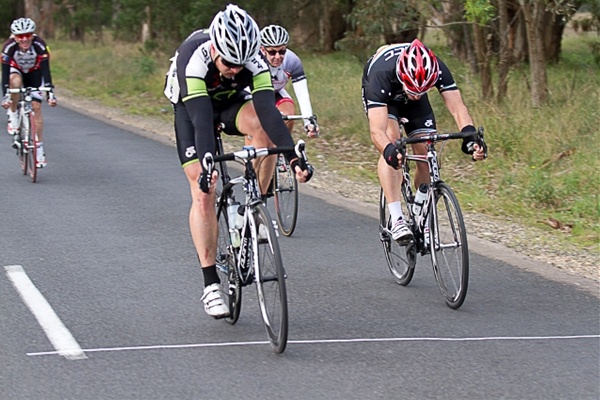 More than 22 riders contested Wellington Cycling Club road championship races on May 19 to crown club champions in A, B and C grades.

Simon Whitford had slipped into B grade, starting as favorite and C grade was anybody’s race.

A and B grade had an 80km race including climbs of up to 18 per cent on Beverley’s Road, while C grade had to complete a 60km undulating circuit.

The first break of the day was by B grade rider Simon Whitford, breaking away from his bunch and passing A grade where he stayed for nearly 45km.

With A grade seemingly waiting for someone to launch an attack, the race was a fast but steady pace.

Several riders punctured in the early stages, including Arnup who was out of the event.

Once on Beverley’s Rd the racing became serious, with A grade passing Whitford on the steepest climb and leaving the B grade bunch behind.

Craig Keane was an unknown quantity in A grade and Nick Jehu remained firmly planted on his wheel as a tactical measure for a final sprint.

Mike Renehan had led the pace up Beverley’s Road, and although unable to shake the bunch, showed that he was a threat for the championship.

A Grade remained a tight bunch right to the finish line, where Jehu out sprinted both Keane and Renehan to become the new club champion.

B grade had been much more a race of attrition, with only three riders together for the final sprint, Rob Murray lead the sprint, but Whitford managed to get in front right on the line and take the win, with Palmer in third.

The C grade race had also been much faster than many were used to and at the final sprint David Murray was too fast for Katrina East and Olivia Verey.

The club hill climb championship was held at Licola on May 26.

A 14km climb on the Licola Jamison Road tested riders with Aaron Wain victorious after an unfortunate road race the week before, with Ben Dowsett and Craig Keane taking minor placings.

In B grade Alan Hill was too good for Palmer and Rohan Cook and C Grade saw Alec Mates out climb Grant Smith and Gary Cotterill.