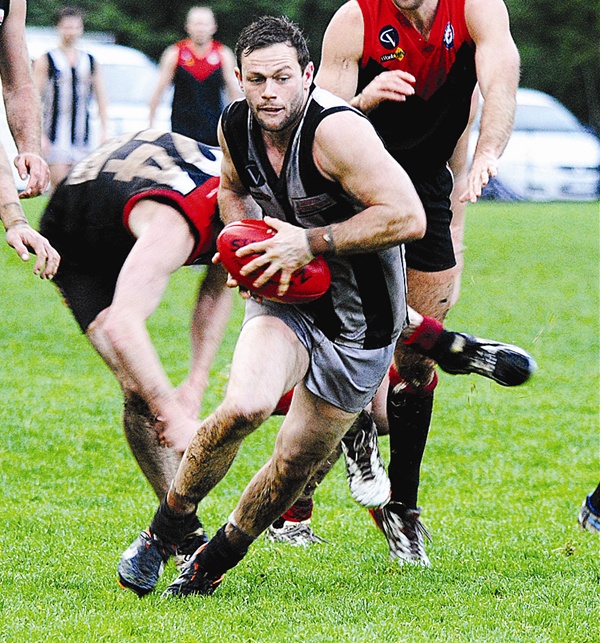 A MORE disciplined Sale side produced a percentage-boosting win over Warragul in a match played in trying conditions at Western Park.

Once again Sale had winners all over the ground with its defence outstanding. For the second week in a row the Magpies held the opposition to three goals to run out 71-point winners, 12.20 (92) to 3.3 (21).

The Magpies were a class above the Gulls, who did not have enough contributors.

Prime movers Kane Martin and Luke Collins were being heavily tagged, but still managed to get possessions.

Warragul’s big man Mark Bradley was tireless on the ball and in defence, but the Gulls relied too much on him as well as Clinton Rowe, Brad Nott and Brendan Sheehan to make significant contributions for their side.

Added to the Warragul woes, regular ruckman Matt Gray appeared to be carrying a foot injury and the Gulls had one player off the ground during the third quarter resulting from a yellow card infringement.

The first quarter was even until Matt Ferguson and Justin McLay kicked late goals from brilliant snap shots. Ferguson, who presented all day, was a focal point for Sale finishing with 4.2.

By half-time Sale’s lead got out to 29 points and from then on the Magpies, although inaccurate, gradually kicked away scoring 5.14 to just two behinds in the second half.

Sale ruckmen Dylan McLaren and Jack Lipman had done a lot of the heavy work and centre half-forward John Gooch, who had been quiet for most of the day kicked the last two goals for Sale to make the scoreboard look more respectable.

After the match Sale coach Ferguson commended the Magpies for the hard work effort in tough conditions. Ferguson said he was also pleased with the Magpies’ honest brand of disciplined football and also gave his younger players special praise for their efforts.

The real test comes this Saturday night when the Magpies host undefeated Leongatha.

The Magpies’ reserves had a comfortable 71-point win, Warragul was too strong in the under 18s, while the Magpies had a 15-point win in an even under 16 contest played in constant rain.

LEONGATHA prepared for this weekend’s top of the table clash against Sale with a crushing defeat of Moe.

Tas Clingan and Roy Mullens carried the ball well for the Lions with Jake Best and Dwayne Holt again among the goals, booting five and three respectively.

The Lions were without forward Ryan Donaldson, who has parted ways with the club by mutual consent.

BAIRNSDALE did enough to hold off the challenge of Drouin, winning by 38 points to keep in touch with the top five.