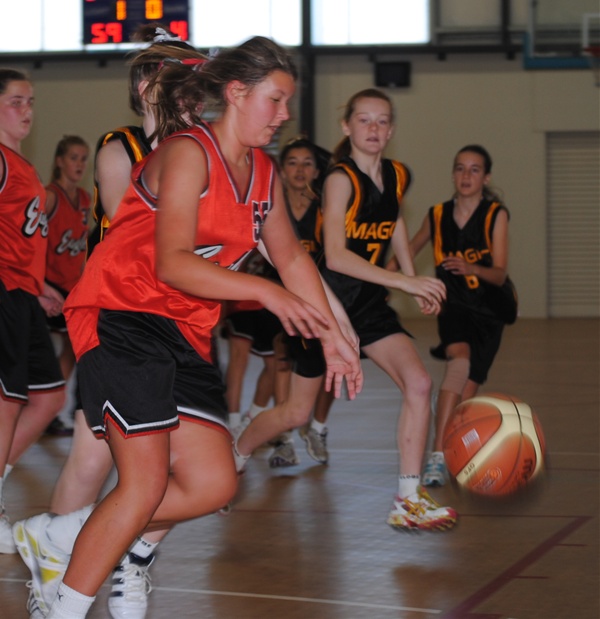 Not only is the event SABA’s major fundraiser, but it also provides an opportunity for many of its young basketball players to have their first tournament experience. Sale was well represented with 12 teams, while Maffra had seven competing.

THE Sale Sonics under 10 boys’ team lost an extremely competitive final to Langwarrin 26-21.

TRARALGON had convincing wins throughout the preliminary rounds of the under 10 girls. In the grand final the T-Birds defeated Maffra 26-5 with Traralgon’s Emersin Devenie named MVP.

WITH so many teams entered in the under 12 boys’ competition, two divisions were created.

In division A, in what became one of many local derbies, undefeated Sale Red played Maffra in a highly skilled grand final. The Sonics led by seven points at half-time before an even second half resulted in the home side winning 34-27.

IN an entertaining under 12 girls’ final, Maffra led Morwell 22-5 at half-time before the Magic outscored the Eagles 17-11 in the second half, but it was not enough as Maffra won 33-22.

IN what was another excellent game, Sale played Maffra in the under 14 girls’ final.

Maffra led by just one point at the break, but the Sonics were able to score more freely in the second half to win 32-27.

SALE’S under 14 boys’ team proved its earlier victory over Maffra wasn’t a fluke by defeating the Eagles 38-17 in the final.

IN one of the fastest and most skilled games of the tournament, Sale faced Traralgon in the under 16 boys’ final.

Brendan Brew and Josh Dunkley found their range early to give Sale a great start with the Sonics leading by five points at half-time. The second half saw an invigorated Sale hit the court, with some big shots from Ben Dessent, Brew, Dunkley and Lachie Ronchi, the Sonics were able to kick away to win 49-19.

The visitors hit the floor running to lead 26-12 at half-time with Tanarly Hood having the most impact on the scoreboard.

Despite a second half fight back, the Sale girls fell short 45-38.

AFTER Sale One beat the highly-rated Traralgon team in the open men’s preliminary rounds by just one point, rematch in the final was always going to be close.

With Traralgon’s Paul Cluff showing his dominance under the boards, the Sale team had to work hard for all scoring opportunities. At half-time Traralgon led 20-19.