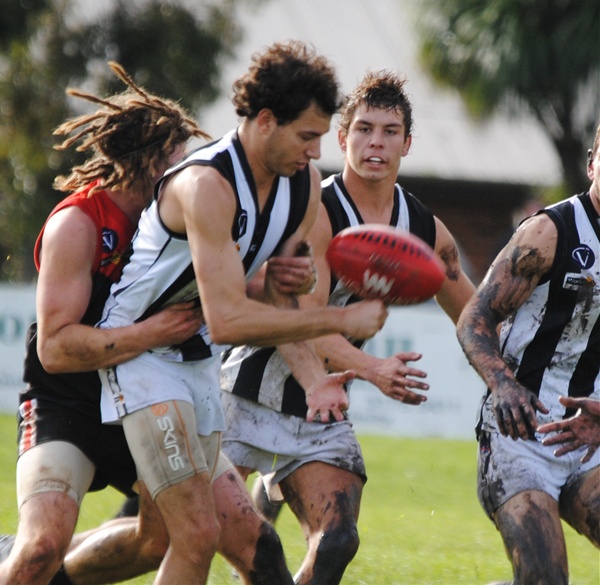 SALE will host Leongatha in a match many observers of the Gippsland League have been waiting for.

The Parrots are the only undefeated side remaining this season, but the Magpies have a superior percentage and should provide the visitors with a major test of their premiership credentials.

Leongatha has a good record at Sale, winning 22 of the 45 matches there, including last season’s 11-point victory.

The Parrots’ 113-point victory at home against Moe last week took their unbeaten start to the season to eight, a club record according to records which date back to their entry into the Central Gippsland league in 1934.

The Parrots’ run was too much for Moe, having booted 11 goals before the Lions managed their first.

As results so far would attest, the Parrots have assembled a strong side with Will Thursfield, David Gourdis and Tas Clingan adding to the quality which was already there and turning them into a serious premiership contender.

Sale has recovered from its shock loss at Morwell in round six with strong wins over Maffra and Warragul.

The Magpies’ defence, featuring Andrew Quirk, Jordan Dessent and Ryan Pendlebury, has been a key, conceding just three goals in each of the previous two matches. They are likely to be kept busy by Leongatha’s in-form Jake Best and Dwayne Holt, who are second and third respectively on the league goal kicking table behind Sale captain-coach Matt Ferguson.

The match is scheduled to begin at 6.20pm.

TWO of the league’s modern day heavyweights will clash tomorrow when Maffra travels to Traralgon.

Between them the clubs have won nine of the past 10 premierships, but injuries to key players have hampered their 2012 campaigns.

Despite concerns about the surface after recent flooding, the match will be played at the Traralgon Recreation Reserve.

A win tomorrow would help keep either side in touch with top sides Leongatha and Sale.

After kicking just three goals against Sale, the Eagles rediscovered some spark last weekend to defeat Wonthaggi by 37 points. Their seven-goal to one second quarter proved the difference.

Traralgon lost to rival Morwell on Monday. The Maroons were behind the eightball after conceding six goals to two in the first term.

Don’t be surprised if this match is close, as four of the past six meetings between the sides have been decided by four goals or less.

Last time the Eagles met the Maroons at Traralgon, Jack Tatterson kicked seven of his 12 goals in the fourth term as the visitors turned a 20-point deficit at the final change into a 23-point victory.

IN other Gippsland League matches tomorrow, Moe will be aiming for a third straight victory at home when it hosts Bairnsdale, Wonthaggi’s bid to gain some consistent form needs to begin at home against Warragul, and Drouin will host Morwell.