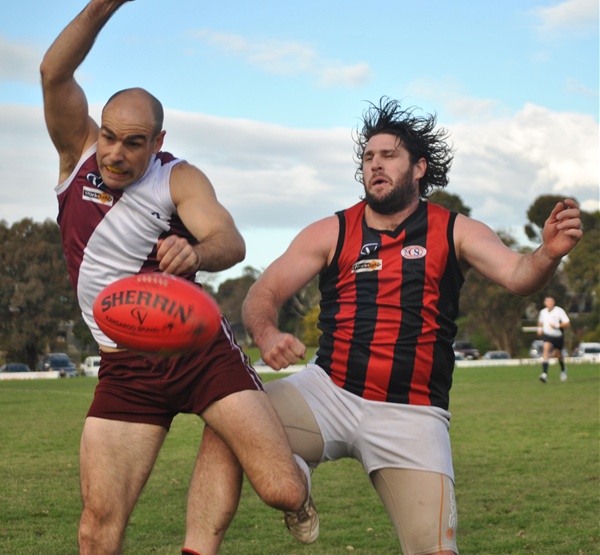 MAFFRA booted four goals to two in the final term to score a come from behind victory at Traralgon.

The 16.5 (101) to 14.10 (94) win not only maintained the Eagles’ third placing on the Gippsland League ladder, but also increased the gap to the fourth-placed Maroons to eight points.

Traralgon had the better of the first half, making it difficult for the Eagles to move the ball out of defence.

The Maroons led by 14 points at quarter-time with Maffra coach Hayden Burgiel putting pressure on his midfielders to get the ball forward. It appears they listened as the Eagles were able to lead by 10 points midway through the second term, with Adrian Burgiel in particular dangerous in attack, booting three goals.

Just as the visitors appeared set to take control, the Maroons fought back, booting the final four goals of the term. Despite Maffra’s positive play, it still lost the quarter with the home side leading by 16 points at half-time.

Things got worse for the Eagles with Gary Jones unable to play in the second half because of a back injury.

Sam Bedggood gave the Eagles some hope when his kick bounced towards goal with the ball elluding defender Jaime Aitken.

After another Traralgon goal, Maffra lifted its work rate with Daniel Bedggood, Adrian Burgiel (two) and Patrick Walker kicking majors to give the Eagles a two-point lead. However, a goal from Dan McKenna, who was dangerous early, put the Maroons in front by four points at the final change.

During the final term, the Maroons were beginning to feel the affects of a five-day break, as the Eagles were able to find ways through their defence.

Kallan Killoran’s hard work was rewarded with a goal which put the Eagles back in front.

Ben Langshaw marked with the flight of a ball before his banana kicked split the big sticks.

A Jacob Weatherley goal put the Eagles 13 points ahead, but the Maroons refused to give in with Mitch Mustoe and Corey Nickels kicking goals.

With the scores level in time-one, a Kel Porter behind was followed by a Daniel Bedggood goal to give Maffra a seven-point win.

Porter and Killoran showed plenty of skill and strength in the midfield, while Brent Connelly provided them with plenty of the ball during ruck contests.

Adrian Burgiel provided difficult to hold in attack, finishing the match with six goals and setting up others. At the other end, Sam Bristow was solid as ever.

Tom McQualter and Aitken were the Maroons’ best with McKenna booting five goals.

Maffra proved too strong in the reserves, winning by 86 points, while Traralgon had the better of the junior matches.

MOE kicked away from Bairnsdale after a close first term to win by 83 points.

WONTHAGGI moved back into the top five with a 26-point win over Warragul.

Jack Blair and Phillip Young set up a lot of the Power attack off half-back with Bryce Marshall and Dominic O’Connor kicking three goals each.

Ben Hughes stood out for the Gulls, kicking five goals.

DESPITE conceding five goals to one in the first term, Drouin overcame Morwell to keep in touch with the top five.