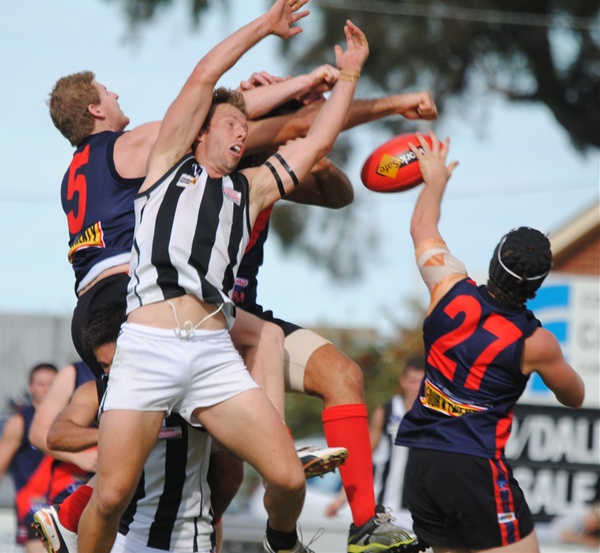 SALE will host an inconsistent Bairnsdale this Sunday during round 10 of Gippsland League football.

With the season heading into its second half, the Magpies are back on top following their victory over Leongatha last Saturday night.

With a 23-point third quarter deficit cut to a goal by the final change, it appeared the Parrots would maintain their unbeaten start to the season, but the Magpies held strong in the final term, kicking 4.6 to nothing to win by 36 points.

The Magpies’ midfield was also able to counteract the Parrots’ running game.

While confident following a quality performance against quality opposition, the Magpies cannot afford to take Bairnsdale lightly, as the Redlegs have recorded wins against Traralgon, Morwell and Drouin. But it’s their losses which have been disappointing, with the Redlegs coming off an 83-point loss at Moe.

In round one, the Magpies scored their third highest ever score against Bairnsdale, 173 to 33, with coach Matt Ferguson kicking 11 goals.

MAFFRA will tomorrow travel to Morwell, which has a lot to play for, even at this stage of the season.

Currently in a six-way battle for fourth and fifth places on the ladder, the Tigers sit outside the top five on percentage, but wins against teams like Maffra could set up their season.

The Tigers have shown improvement, having already won four matches compared to five for the entire 2011 season.

After its Queen’s Birthday victory over Traralgon, Morwell came back to earth with a 22-point loss at Drouin. The result was disappointing for the Tigers, considering they led by 27 at quarter-time.

Jack Brown and Michael P. Duncan were the Tigers’ best, and will be called upon again tomorrow against Maffra’s potent attack, especially with Adrian Burgiel in form.

The Eagles’ accuracy in front of goal helped them overcome Traralgon last weekend.

The match was a see-sawing contest with Maffra’s run and accuracy factors in the seven-point win.

The Eagles now have some breathing space in third place, two wins ahead of the fourth-placed Maroons.

IN other Gippsland League matches tomorrow, Drouin will host Moe in a crunch game, Traralgon will meet Warragul, Wonthaggi will host Leongatha in the south Gippsland derby.