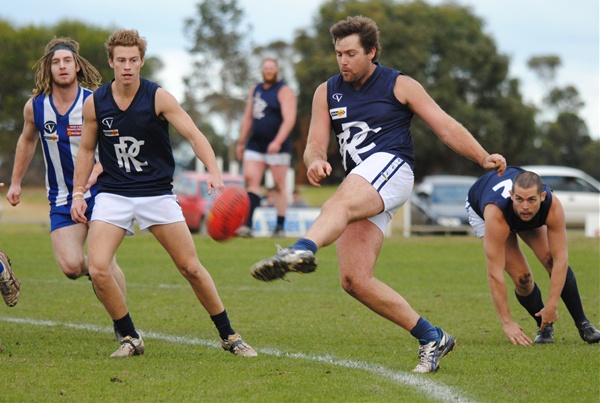 ROSEDALE inflicted Heyfield’s first loss in five weeks, defeating the Kangaroos 19.18 (132) to 7.10 (52) in a match which had North Gippsland football followers talking throughout the week.

While there was plenty of talk around the most eagerly awaited contest of the past month, the clash failed to live up to the hype with the ladder leaders on song from the opening bounce.

Boasting 12 scoring shots to three in the opening term, the match could have been easily over by quarter-time, however inaccuracy in front goal by the Blues kept the Kangaroos in the contest.

Leading by three goals at the end of the quarter, the Blues continued to edge away, kicking four majors to two during a tight second term.

Each time Heyfield challenged, Rosedale responded with ease, continually finding space and opening the contest up with its ground speed.

Rosedale broke away early in the third term, but inaccuracy again proved telling with four behinds for the quarter.

A captain’s goal by Rosedale’s Chris King from just inside the forward 50 kicked things off in the final term, it was quickly followed by another from Brad Caldwell and Chris King’s second goal for the day.

The Blues, led by Dominic Keating, drilled the ball quickly from defence with Darcy Murray snapping true for a goal.

Rosedale’s forwards lined up for goals in the final term, piling on six majors to one, sending a message to opposition sides that it is a definite threat for this year’s silverware.

Jon Cantwell was one of the architects of Rosedale’s win, winning the ball at the centre bounce to set up the Blues’ engine room. His presence at the contest was invaluable.

Rohan Diamond was a difficult match-up and left the Kangaroos’ feeling the raft of his countless possessions, while Daryl Mayman was hard at the ball throughout the day.

A GOAL after the siren from Tom Wilson gave Sale City a five-point victory at Glengarry.

The Bulldogs were trailing by a point when the siren sounded with the ball in Wilson’s hands. His kick split the big sticks to give the visitors a 13.8 (86) to 11.15 (81) victory.

Little separated the sides throughout the course of the contest, a rematch of last year’s North Gippsland grand final. Having been convincingly outplayed in their round one meeting, the Magpies were a different prospect with scores level at the first change.

The visitors had their chances in the second term, boasting eight scoring shots to five, but inaccuracy proved costly with City leading by only eight points at the long break.

The third term was a dogged affair with the Magpies able to reel the margin back to under a goal.

The final term was relentless with both sides going goal for goal in a tight 20 minutes of football with Wilson’s goal after the siren separating the sides.

Marty McDonough has been a welcome addition to the City line-up this season from Stratford, playing one of his best games in Bulldogs colours.

Lachie Little and Aaron Winkler were stand-outs for the Magpies.

COWWARR came from 14 points down at three-quarter-time to defeat Churchill by nine points.

The win places the Saints back in contention with Glengarry and Churchill locked on 20 points in the battle for fifth position. For the Cougars, it was a case of the one that got away as they found themselves flat footed and wanting in the final term after a solid start.

Shane Morgan was the Saints’ best, with his intensity throughout the contest superb. Luke Cooper’s outstanding season in the midfield continued for the Saints and he was well supported by Jordon Bourke and Brett Street.

TRARALGON-Tyers United gave its chances of playing finals a major boost with an 86-point thumping over a disappointing Woodside.

The third-placed Bombers won all four quarters on their way to a second victory from their past three games.

Chris Graham was dominant through the midfield, Cody Brown was a solid performer, while Dylan Loprese booted four goals.

Nic Dent and Matt Lane again played good games for the Wildcats, as did Ben Johnson and the reliable Ben Missen.

GORMANDALE took another step forward in its improvement, winning its second game of the season in convincing fashion to celebrate coach Paul Richard’s 200th club match in style.

The Tigers led Boisdale-Briagolong by just four points at quarter-time and from then on were brilliant, winning by 85 points, 18.10 (118) to 9.6 (60), dishing out the type of hiding they had been on the end of so often this season.

Ruckman Toby Callanan and midfielder Bobby Pacunskis led the way for the Tigers, along with Jarrod Barnes who worked hard off the half-back line. Luke Francis kicked four goals.

It was a tough day for the Bombers, with Owen Sim working tirelessly in defence, while Nicoll Sandison (four goals) was an imposing figure when the ball was delivered strongly forward.