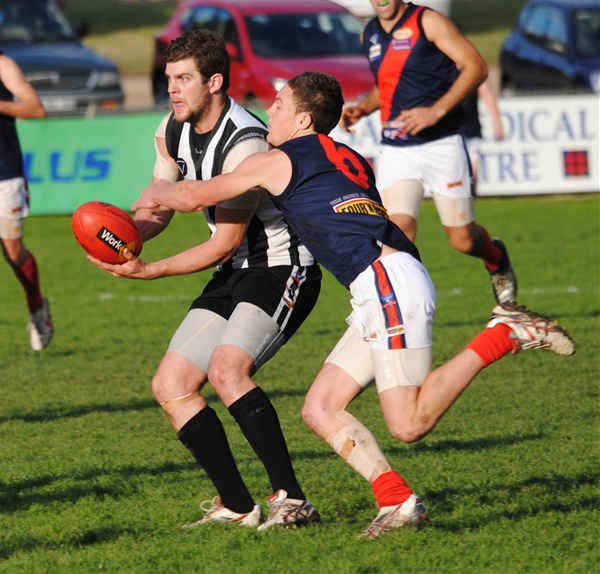 SALE recorded its biggest ever win against Bairnsdale, defeating the Redlegs by 176 points at home on Sunday to maintain its winning run in Gippsland League football.

Coach Matt Ferguson said at quarter-time he was not satisfied with his team’s ball use. The players took the advice on board, responding with a second term of 10.2 before kicking 9.3 in the third and 7.6 in the final quarter.

After the match, Ferguson again paid tribute to his miserly back six, who have been outstanding in limiting scoring opportunities. Their defence is the reason why the Magpies have a percentage of 289.9, compared to the 186 per cent of second placed Leongatha, which is on the same points.

Ferguson pointed out the Magpies didn’t have any passengers with everyone working for the team and sticking to the game plan.

The Magpies worked the ball into space with accurate passing and were playing a brand of football which was entertaining.

The Redlegs kept persisting and got plenty of cheers when they finally broke through for two goals from Rob Soulsby and Bayden Ashwood in the final quarter.

Midfielders Xavier Ryan and Luke Dyer worked hard, Shane Jamieson was good on the ball, Soulsby worked hard in the ruck and Paul Bills was good in defence.

In a high standard under 18 game, Sale came home strongly by finished five points short of the top-placed Redlegs.

In the under 16s, top side Sale defeated a competitive Bairnsdale by 33 points.