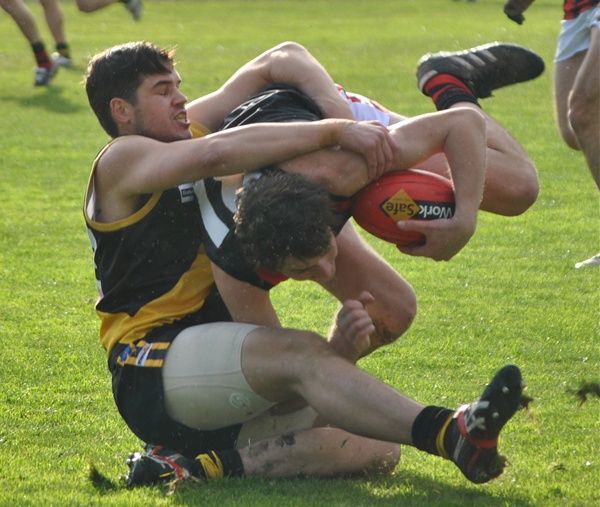 MAFFRA was out-played by Morwell, loosening its grip on third place on the Gippsland League ladder.

A question around this match was simple: which Morwell side would turn up – the one which defeated Sale and Traralgon, or the one which has lost to Moe and Drouin?

Unfortunately for Maffra, it was the former.

For the first three quarters, the Eagles conceded the first two goals, forcing to play catch-up.

The Eagles were fortunate to be only eight points down at quarter-time as they kicked two late goals after the Tigers missed some good opportunities to kick goals.

The visitors found themselves 19 points down early in the second term, but gradually fought their way back into the contest as goals from Jackson Scott, Sam Tudor, Alex Carr and Daniel Bedggood gave the Eagles a one-point half-time lead.

Just as it appeared the Eagles had the momentum heading into the second half, the Tigers again kicked the first two goals of the third quarter. The home side’s lead reached out to 24 points late in the term before an Adrian Burgiel goal gave the Eagles hope ahead of three-quarter-time.

Trailing by 18 points to begin the final term, the Eagles needed the first goal of the term. Joel Lambourn obliged after marking in the goal square after pressure from the Eagles paid off.

Eight points was as close as Maffra would get as the Tigers kicked two of the final three goals of the match.

Josh Stubbe and Winston Gieschen worked out of defence for the Eagles, while Jackson Scott held his own.

Sam Tudor and Dan O’Brien were the pick of the Eagle onballers.

Three unanswered goals in the final term helped Maffra win the reserves match by 32 points, while Morwell won the under 18s and Maffra the under 16s.

REIGNING Leongatha best-and-fairest Beau Vernon has been put in an induced coma after suffering a serious neck injury.

The win was set up by an eight-goal to three first half.

Chris Verboon was the Parrots’ best with Jake Best back in scoring touch, booting three goals.

DROUIN kept in touch with the top five with a 19-point victory over Moe.

TRARALGON returned to the winners’ list after defeating Warragul by 58 points.