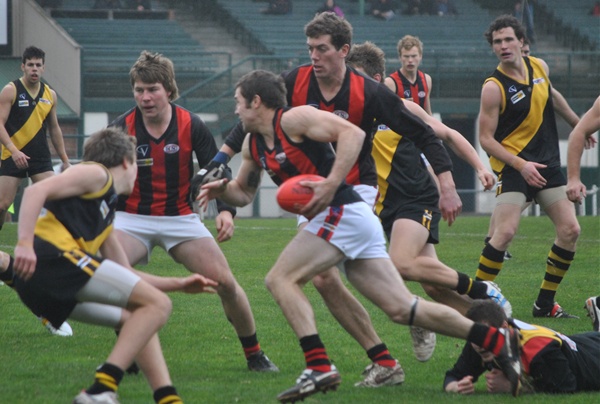 MAFFRA will return home for the first time in three weeks to take on Drouin tomorrow in round 11 of the Gippsland League.

Following wins against Wonthaggi and Traralgon, the Eagles appeared to have rediscovered some solid form, putting them two wins clear in third spot, but their loss at Morwell has brought them back to the pack a little. Another loss will put the Eagles back in the pack.

The Eagles will need to be switched on from the start. They conceded the first two goals in each of the first three quarters against Morwell.

The Eagles will have to contend with the absence of forward Daniel Stubbe, who is heading to Queensland.

The Hawks scored a hard earned win at home over Moe last week. With a win-loss record of 4-6 with eight rounds remaining, the Hawks have some work to do to get to the minimum nine wins needed to make the finals.

In nine trips to Maffra, Drouin has only come home victorious once, in 2009.

AT Moe, Sale has a good chance to end a trend of eight matches where the home side has won.

In round two at Sale, the Magpies won by 113 points. Amazingly that was only the Magpies’ third biggest victory margin.

Last weekend, Sale thrashed Bairnsdale by 176 points, and only conceded two goals, which came late in the final term.

For Moe, currently on three wins and seven loses, the next three weeks, with matches against Sale, Wonthaggi and Traralgon, could determine if it remains a chance to make the finals.

The Lions put in a respectable effort in going down at Drouin by 19.

IN other matches, Leongatha will host Traralgon in a possible finals preview, Bairnsdale and Wonthaggi will be keen for victory to remain in touch with the top five, and Morwell needs to win at Warragul in order to maintain consistency and show it’s a finals contender.