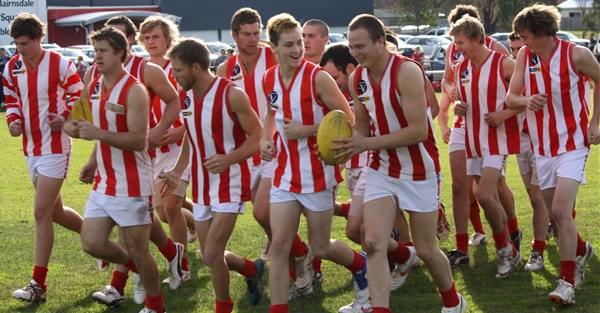 STRATFORD will be confident of securing a third straight win when it travels to take on bottom-placed Orbost-Snowy Rovers for round 11 of East Gippsland football tomorrow.

In its first season in the EGFNL, the Swans have improved as the season has progressed and still remain in contention to play finals football.

Stratford currently sits in sixth position on the ladder but still has its second bye to come, which effectively puts it two points clear of Lakes Entrance in fifth and half a game behind the fourth-placed Lucknow.

The Swans will be looking to continue their good form, with last week’s victory over Paynesville, knocking the Gulls from top spot.

If Stratford can play the same type of football which saw it defeat Paynesville, the Swans will go a long way towards defeating OSR, who is already out of finals contention with just the one win.

The Blues’ defence will have its work cut out, with Josh Kiss continuing his good form in front of goal last week along with James Russell, who chipped in with four majors last week.

Lewis Bolton, Jarryd Clohesy and Stephen McKerrow were other solid contributors last week that the Blues will need to negate.

The Swans came away with a comfortable 46-point victory the last time the sides met, and will be hoping to not slip up this time around either to remain in touch with the top four.

IN other EGFNL matches, Lucknow could leapfrog its opponent Lindenow into third place on the ladder with victory tomorrow, and Paynesville and Lakes Entrance will have the opportunity to bounce back from round 10 defeats. Wy Yung has the bye.