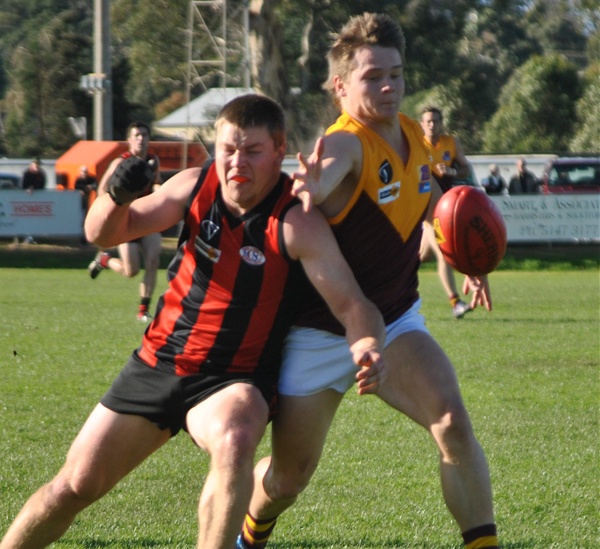 MAFFRA held on to defeat Drouin by five points, despite a final term comeback by the Hawks.

The Eagles appeared unbeatable after a seven-goal to two third term gave them a 35-point lead at the final change, but the Hawks were able to lift, kicking five unanswered goals in the fourth term.

After 11 month, Maffra coach Hayden Burgiel returned to the senior side. He displayed some of his trademark skill, with his first touch a typical Burgiel long kick.

Sam Tudor, Dan O’Brien and Kel Porter used the ball effectively in the midfield, with young Jackson Scott continuing to impress and captain Ben Batalha setting up attack out of defence.

The visitors had the better of the start, kicking the first two goals before the Eagles finally found their form with goals from Scott and Winston Gieschen giving them a four-point lead at quarter-time.

The second term was another see-sawing affair with both sides kicking three goals as the Eagles’ lead was extended to six points at half-time.

Leading by just five points midway through the third term, the Eagles made their match-winning move, beginning with a goal from Bedggood after a free kick.

Alex Carr kicked a crumber’s goal, finishing off a great team play running the ball out of defence. Carr then set up a goal for Adrian Burgiel.

An O’Brien goal stretched the margin out to 29 points before Drouin finally responded through a major from 100-gamer Daniel Barrand.

The game appeared in Maffra’s keeping after Bedggood booted two late goals, establishing a 35-point at the final change.

Pat McGrath, Bob McCallum and Matt Hedley were instrumental in the Hawks’ fightback, but they simply gave the Eagles too much of a headstart heading into the final term. McCallum finished the match with three goals.

The senior victory completed a clean sweep for the Eagles on the football field.