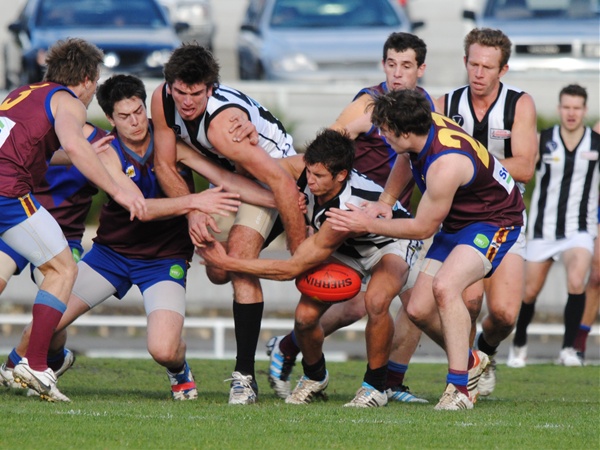 IN an unusual lack-lustre performance, it took Sale three quarters to get its game plan going and shake off a persistent Moe in Gippsland League football.

Sale led all day but its early effort was unconvincing. The Magpies’ intensity that has been evident in recent weeks was missing in this match.

Sale was off target early, and its tally of tackles well below par.

There were times also when Sale’s usually tight defence let Moe in for easy goals as the Lions broke through the Magpies’ forward press. Even so, the Sale defence was generally solid with Shane Fyfe and Jordan Dessent standing firm.

Sale ruckmen Jack Lipman and Mitch Davis won most of the centre bounce hit-outs, to which Sale prime movers Corey Scholtes, Kane Martin and Luke Collins took advantage of and helped set up the Magpies’ victory.

Under pressure, the much younger Lions’ efforts were commendable as they stayed within reach of the Magpies during the first half as there was only a 19-point difference at the long break.

Sale held Moe goal-less in the third quarter while adding three of its own.

At three-quarter-time, coach Matt Ferguson insisted the team adhere to the game plan and lift their work rate even further. The Magpies quickly responded with four consecutive goals to put the match out of Moe’s reach.

The final quarter, which went for 35 minutes, produced the best football of the day in which Sale scored 7.5 to Moe’s 5.2. The highlight was when the speedy Rathnow kicked a goal off the ground from 30 metres as he ran at full speed around the boundary line.

The Sale reserves had an unimpressive 59-point win, the under 18s were too strong for Moe, winning by 88 points, while the under 16s had a runaway 95-point win.

MEL George began his tenure as Bairnsdale coach with a 61-point loss at home to Wonthaggi.

George was promoted to the top job after the Redlegs’ committee sacked Alister Ford following a run of lack-lustre performances, highlighted by a 176-point demolition at Sale the previous weekend.

Despite having the same number of scoring shots, the Parrots trailed by 15 points and were kept goal-less at the first change before they wrestld control from the Maroons to win 5.12 (42) to 4.6 (30).

Tas Clingan led the way for the Parrots.

The Tigers only kicked two goals from nine scoring shots in the first quarter, but were in control for the much of the match. The Tigers kicked five goals to one in the second half to win 10.20 (80) to 4.9 (33).