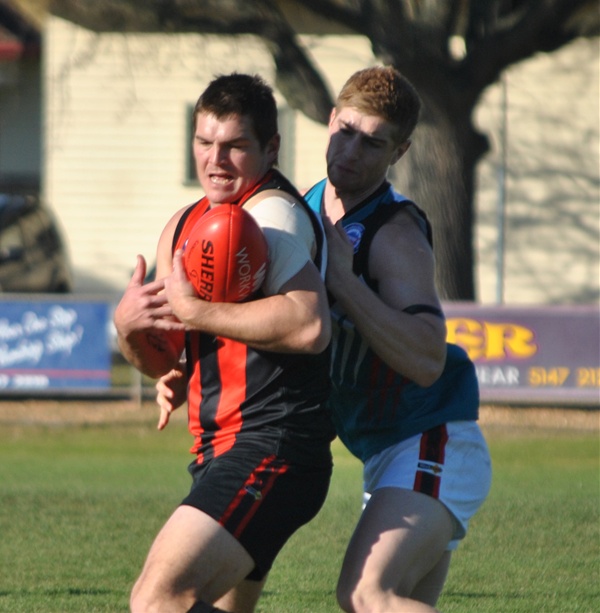 AT first glance it appears, with a 95-point margin, Maffra dominated Warragul, but that was not the case.

The Gulls, with under 18 coach Justin Cant stepping up to take the senior job following the resignation of George Morgan midweek, took the fight up to the Eagles during the first and third quarters.

The Gulls began well, booting the first two goals with the Eagles taking their time to respond, eventually taking the lead, only for Ben Hughes to kick his second major for the term and level the scores heading into quarter-time.

The Eagles were out-played in the centre, with the Gulls winning most of the clearances.

At the first change, the Eagles, particularly their midfielders, copped a spray from coach Hayden Burgiel. They responded well, with Gary Jones, back in the side after injury, kicking a goal on the run.

Adrian Burgiel was central to most of the Eagles’ attack during the second term, booting six goals and setting up others. Burgiel kicked eight of his nine goals for the match in the first half.

The Eagles were also making the most of another return from injury, Kallan Killoran.

The strong quarter gave the Eagles a 68-point lead at half-time.

Warragul tried hard to make inroads into the deficit, kicking four of the first five goals of the third quarter, getting the margin down to 42 points at one stage.

The Eagles were able to steady, heading into the final term 60 points ahead. putting an end to any faint hopes the Gulls had of a miraculous victory.

Maffra forward line was on song, with Daniel Bedggood and Connelly kicking four goals each and Jones three to support Adrian Burgiel.

The Eagles were missing Alex Carr to Gippsland Power, Dan O’Brien and Owen Booth, while Daniel Stubbe’s clearance to Queensland has been finalised.

Ben Hughes did his best to keep the Gulls in the contest, booting six goals, while Ben Drew and Mitch Nobelius gave the visitors drive through the midfield.

Maffra moved into second place on the reserves ladder with a big win, with Eagles winning the under 16s game and the Gulls victorious in the under 18s.