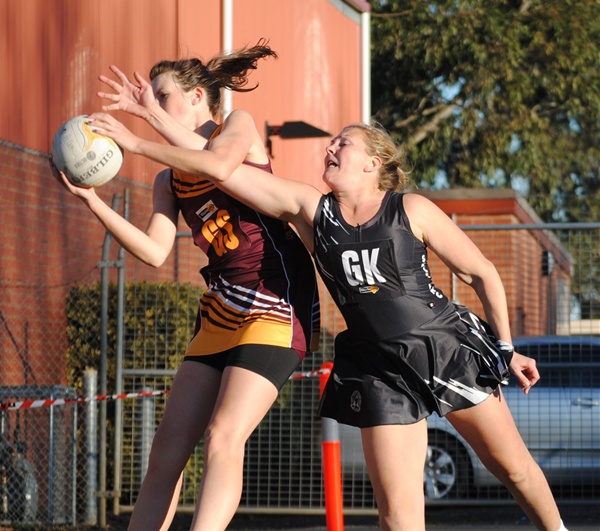 MAFFRA remains four points off fifth-placed Drouin on the Gippsland League A grade netball ladder following a 55-33 at home against Warragul.

The victory ended a run of five successive defeats for the Eagles, but will face a major challenge to continue that winning streak at Leongatha next weekend against the ladder leading Parrots, who will be coming off an upset loss at Morwell.

The A grade win completed a clean sweep against the Gulls.

SALE remains in second place on the Gippsland League A grade ladder despite a six-goal loss at Drouin.

The Magpies are just two points clear of Traralgon and Wonthaggi, who are third and fourth respectively, who they will play over the next two weeks, beginning with the Power at home.

The Hawks led by five goals at three-quarter-time with the Magpies getting within two goals during an exciting final term, but breaks at the centre pass, two held ball decisions and turnovers cost the visitors, who lost 58-52.

Drouin was too strong in B and C grades, with the Magpies winning the three junior matches.

The eagerly anticipated clash between the top two sides Rosedale and TTU failed to disappoint with the reigning premiers flexing their muscles early against last years Grand Finalists.

With the Blues leading by six goals at the first change, the sides went goal-for-goal throughout the remainder of the contest with the Bombers unable to eat into the deficit. The Blues avenged their round three loss to win 50-42.

Churchill took the honors in a tight contest against Gormandale. The Cougars led at each change before withstanding a final term fightback from Tigers to win 51-47.

Heyfield recorded its fourth win of the season, with its 20-goal third quarter killing the contest against Boisdale-Briagolong.

Sale City led Woodside at each change before winning by seven goals.

STRATFORD remains in second place on the East Gippsland A grade table after the Swans defeated reigning premier Wy Yung.

Only percentage separates the Swans from top side Lakes Entrance.