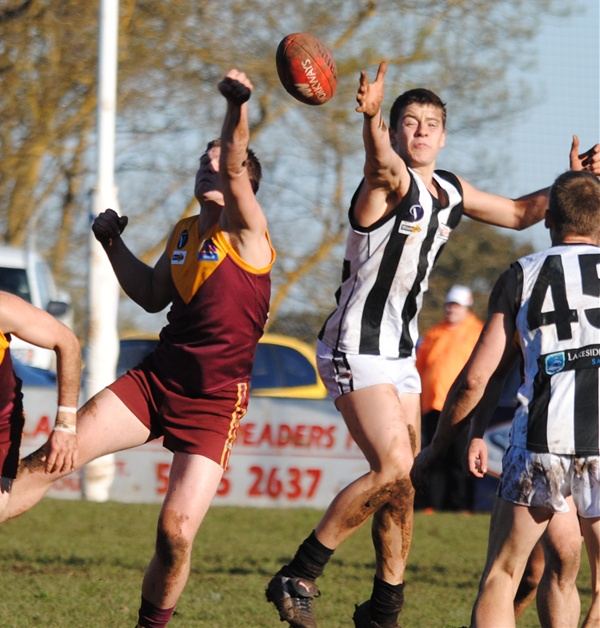 SALE powered away in the final stages at Drouin by 45 points in the game played in heavy conditions.

The Hawks, needing a win to stay in touch with other finals contenders, fought hard all day but could not match the more disciplined Magpie outfit.

Sale’s huge tally of tackles was a vast improvement on the previous week’s effort. Under pressure, the Hawks overdid their handball and turned the ball over far too often.

Sale won around the packs and its experienced defenders, led by Shane Fyfe and Chris Laverty, continually ran off their opponents, and with long kicks delivered the ball deep into the forward line.

It was business as usual for Sale’s back six, who has now played more than 450 games between them, making it probably the most experienced in the league.

The Magpies again had winners all over the ground with young wingmen Josh Dunkley and Josh Kennedy outstanding. These two were singled out for special praise by Sale coach Matt Ferguson at the end of the game.

The 15-year-old Dunkley, with 10 tackles and three goals, produced a physical presence beyond his years and looks set for a bright future.

Ruckman Jack Lipman had the better of Drouin’s Bob McCallum at the centre bounce contests, winning nine hit-outs to six.

Drouin’s efforts were commendable for staying within reach of the Magpies until three-quarter-time with Daniel Seri and Steve Ballingall kicking two goals each.

Around the ground, Cam de Gooyer, Jordan Wyatt and Pat McGrath never gave up trying for the Hawks, however, as the game progressed, the Magpies were never threatened and always had the upper hand.

The Magpies’ reserves were disappointing, going down by 20 points, while their under 18s were too strong, winning by 62 points, and under 16s won a low-scoring match by five.

MORWELL continued its outstanding form at home, inflicting only the second defeat on Leongatha this season.

After a tight first term, the Tigers were able to shut down the Parrots’ running game, booting four unanswered goals to lead by 29 points at half-time.

The Tigers could have killed off the contest in the third term, but kicked 1.6, though also restricted the visitors to 1.2.

Aaron Ware kicked five goals in a best-on-ground performance for the Power, who won every quarter, beginning with a five-goal to two first term to set-up the win.

TRARALGON inflicted another heavy defeat on Bairnsdale, this time by 98 points.

Danny Campbell and Michael Geary, who had been sick all week, were the Maroons’ best with Lee Stockdale kicking six goals.