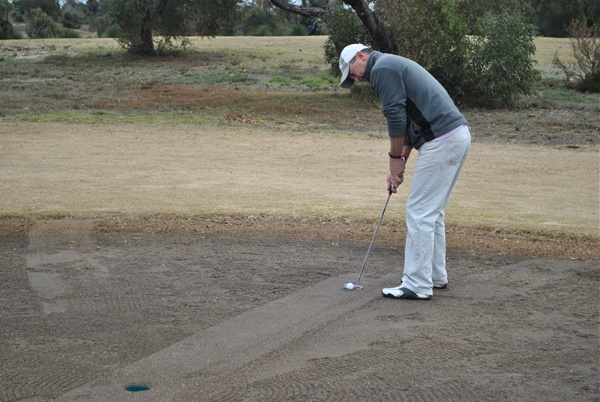 Andrew Kane, who hails from Boort but is a member of the Barham Golf Club, finished runner-up to Schneider for the second consecutive year.

Loch Sport Golf Club secretary Ken Leach said the tournament was a huge success for the small club and town, with more than 100 golfers making the trip to participate in the tournament, which was made possible by a Wellington Shire Council community event grant and significant contributions from numerous sponsors.

“Today (last Friday) is a roll up and basic get to know the course day and we have 84 out there on the course,” he said.

“We have 104 entries with individual competitions in A, B and C grade.

“People have come from all over the state, including Barham and the Eastwood club in Melbourne with the best score off the stick crowned Victorian sand greens champion of the year.

“It is a full state title and we had many players better than scratch, and many others around scratch.”

Leach’s prediction on Friday of a big duel between last year’s championship winner Nathan Schneider and runner-up Andrew Kane proved to be correct, with the pair again finishing one-two.

Leach said the event also provided a significant economic boost for the town, with just four of the competitors local.

Leach said the tournament had been three years in the making for the small club, which had received positive feedback on the course throughout the tournament.