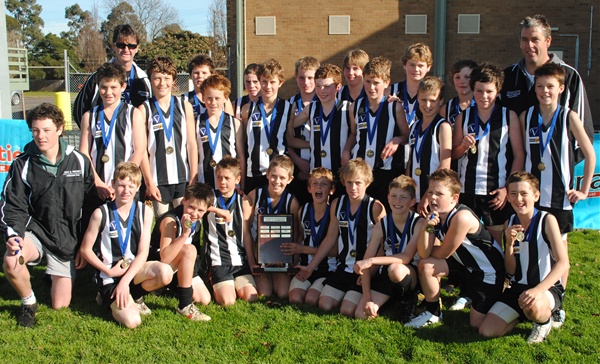 SALE and District Junior Football Association won the under 12 grand final as the Gippsland junior interleague championships concluded on Sunday at Sale Oval.

Having made all three grand finals, the under 12s was the only success the S&DJFA had.

In the under 12 grand final, Sale, coached by Peter Allman and assisted by Andrew Dunkley, was too strong for Warragul and District, winning by 63 points.

Sale’s Jack McLaren voted best-on-ground by the umpires, while Warragul’s Ethan Sauze was voted under 12 player of the carnival.

The match of the day was the under 14 decider between Sale and Central Gippsland.

It was an even game with the lead changing constantly. It wasn’t until the final quarter Central Gippsland pulled away to win by 15 points.

The umpires voted Ben Ainsworth from Central Gippsland best-on-ground, while he was also named under 14 player of the carnival.

Traralgon and District met Sale in the under 16 final.

Traralgon had control of the game from the start with Sale fighting hard to stay in the game, but the visitor was too strong and took the game out by 72 points.

Ryley Loprese from Traralgon was named best-on-ground. The award for under 16 player of the carnival was shared by Traralgon’s Kyle Stammers and Sale’s Patrick Gordon.