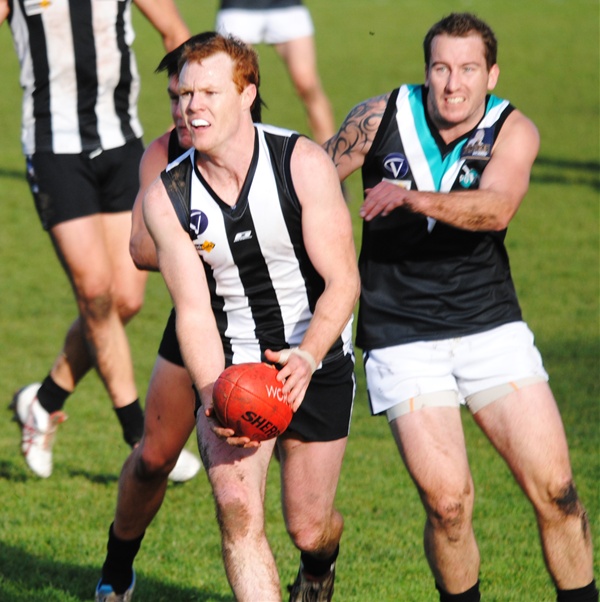 The crowd was very anxious and quiet when Collins, who has been having an outstanding season, went down on the grandstand wing during the third quarter after a sliding clash. Collins was taken off the ground on a stretcher and taken to hospital.

Magpies head trainer Stuart Thomas said the Power trainers were upset as they had been on duty just a few weeks ago when Leongatha’s Beau Vernon went down at Wonthaggi.

Magpies president Scott Pearce’s announcement at the club’s player reunion on Saturday night that Collins was okay but would stay in hospital overnight was greeted with applause and relief.

Jack Lipman and Dylan McLaren gave the midfielders first use of the ball with Kane Martin’s breakaway pace, long well-directed kicks setting things up for the forwards.

The defence, led by Jordan Dessent, Chris Laverty, Lochie Todd and Shane Fyfe, kept rebounding the ball and limited the Power to only five goals for the match.

Kane Fraser and Brendan Rathnow were good up forward, with four goals each. Rathnow seems to be enjoying his attacking role.

With seven players among the goals, it has taken the pressure off leading goal kicker Matt Ferguson, who was able to come off a break with a slight hamstring twinge.

The Sale reserves scraped home by two points, and the under 18s had another close match with the Power winning by 16 points to strengthen its spot in the top five.

The Magpies’ under 16 team scored a runaway win with Nash Holmes and Lochie Ronchi kicking six and five goals respectively.