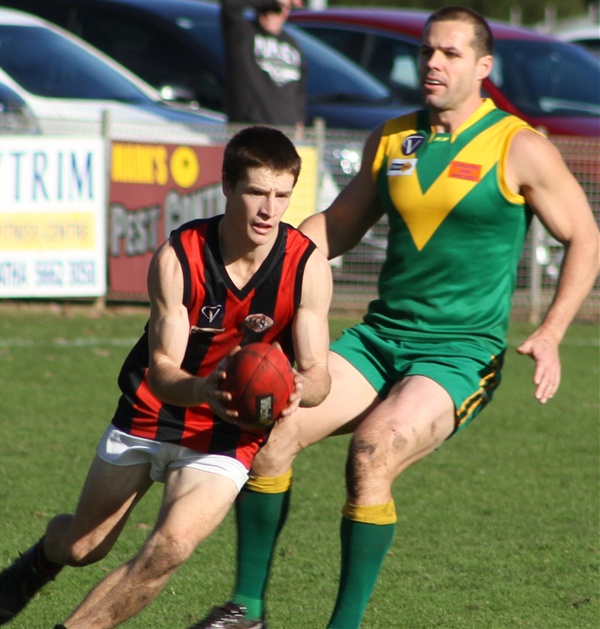 MAFFRA is now three wins off second place on the Gippsland League football ladder following a 17-point loss at Leongatha.

The Eagles would have taken positives from the loss, matching one of the premiership favourites for three quarters on their own turf.

Without an injured Adrian Burgiel, the Eagles matched the second-placed Parrots in the first quarter, trailing by a point before an inaccurate home side kicked five goals to three in the second to extend the margin to 17 points at half-time.

The Parrots killed off any chance the Eagles had of an upset win during the third quarter, when they kicked four goals to one to head into the final term 36 point ahead.

The Parrots again boasted many avenues to goal with best-on-ground Chris Verboon, Jake Best and the returning Dwayne Holt kicking 11 goals between them. Forward David Gourdis and midfielder Cameron Stone were also prominent for the winners.

For the Eagles, Kel Porter, Hayden Burgiel and Jackson Scott moved the ball well around the midfield, while Joel Lambourn kicked three goals.

Following a goal-less first term, the Maffra reserves lost by 60 points, while the Eagles lost the under 18s match by 17 but were too strong in the under 16s, winning by 85.

A GOAL after the final siren from Rob Michaelides gave Morwell a share of the points at Bairnsdale.

It was the first time in 83 meetings the team have drawn and the Tigers’ first draw in the seniors 1975.

The Redlegs led by 11 points at half-time before the Tigers kicked three goals to one in the third term to level the scores at the final break.

Michaelides was awarded a free kick before the final siren sounded with his kick from 35 metres out splitting the big sticks and levelling the scores, 8.12 (60) apiece.

WARRAGUL turned a 34-point quarter-time deficit into a three-point win against rival Drouin on Sunday.