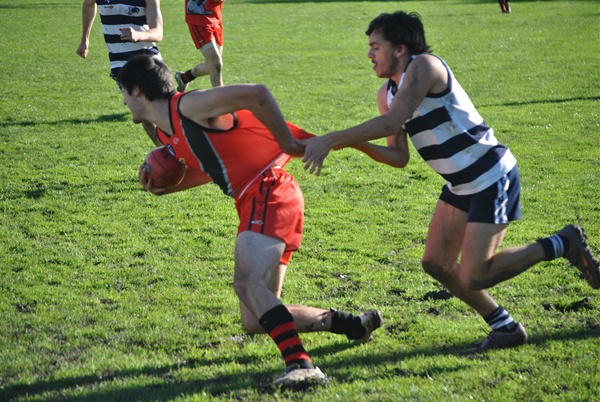 RELIEF was the overriding feeling at the Woodside Recreation Reserve as the home side posted its first win of the North Gippsland football season, defeating Boisdale-Briagolong by eight points.

It was high-fives all round as the players celebrated a victory which had been 13 weeks in the making.

Led by best-on-ground Josh Griffin, Ben Johnson and Clint Hillas, who kicked six goals, the Wildcats were damaging in the second half after a sluggish opening two quarters.

The Bombers were dominant early with Owen Sim starring along with Alex Munro and forward David Berry, but that form eluded the visitors after the main change as they could do little but watch as the Wildcats slammed home six unanswered majors in the final term.

Having failed to score in the opening term, the Kangaroos were simply outplayed as Churchill’s tenacity at the ball saw them kick 3.7.

The Kangaroos rallied in the second quarter, slotting through their first major 10 minutes into the term before adding two more to match the Cougars for the term.

Midfielders Joey Whykes and Christopher Williams amassed possessions for the visitors with Tyson Webb locking down Mitch Dowse in a run-with role. The Cougars’ midfielders found plenty of the ball as they set up forwards Dale Patterson and Brendan Holt.

After a scrappy opening to the third term, Josh Neille broke the shackles to register a major for Heyfield after some effective roving of the pack.

A goal from Michael Delaney drew the Kangaroos to within 10 points.

Leeds responded with a goal for the Kangaroos before Patterson had another. A goal to Callan Egan on the three-quarter-time siren reeled the margin back to 14 points at the final change.

A snap at goal over his head registered Tom McMillan’s first goal for the day and left everyone wondering how he did it. The Kangaroos added another as they drew within two points.

After Bedggood chased the ball along the wing to regain possession, a free kick to Szabo brought the veteran to within scoring distance with his shot at goal putting the Kangaroos in front.

The Cougars worked hard to respond, but could do little in a scoreless term, which saw the home crowd willing their team over the line in a tight physical battle, 11.9 (75) to 10.9 (69).

ACHIEVING what no side had been able to do in the past three seasons, Cowwarr held two-time reigning premier Sale City scoreless during the third quarter on its way to a 35-point win.

Missing Jake Schuback and Josh Tollner, the Bulldogs’ poor third quarter showing opened the door for the Saints to turn an 11-point half-time deficit into a 19-point lead at the final change.

The Saints continued their relentless onslaught in the final term, booting five goals to two as they won 14.9 (93) to 8.10 (58) to ensure their top five aspirations remained alive.

Ruckman Paul Joyce continued his dominant form of the past fortnight in a best-on-ground performance. Joyce provided headaches for the Bulldogs, whose ruck stocks are diminished.

Leading by eight points at the first change, the Magpies appeared poised to test Rosedale’s resolve, but dropped away in the second term as the Blues dominated play.

The Blues kicked away to a commanding lead, one which would serve them well for the remainder of the contest.

Midfielder Dale Fleming was the Blues’ best, with Lochie Little leading the Magpies.

TRARALGON-Tyers United tightened its hold on a top five spot with a percentage-boosting 117-point victory over Gormandale.