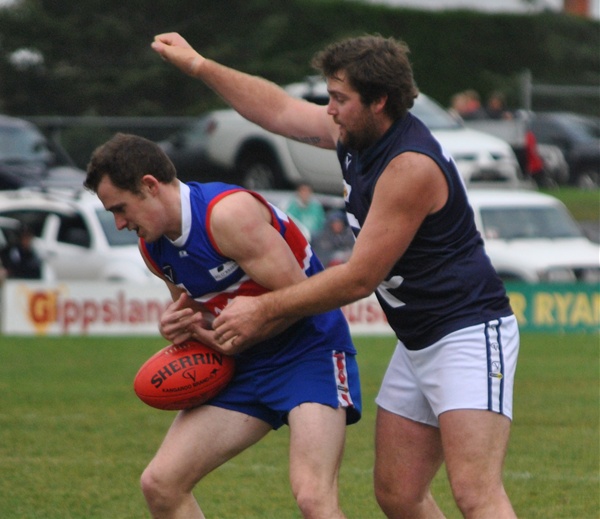 WITH a list of absentees which included premiership players Jake Schuback, Josh Tollner, Joel Brayshaw and Jake Milham and new recruit Sean McGrath, it was hard to see how such a depleted Sale City line-up could topple flag favourite Rosedale.

But football is a funny game, and the crowd at Stephenson Park on Saturday saw that for themselves as the down and out Bulldogs came from behind to snatch one of the most enthralling contests of the North Gippsland football season.

For a contest which carried so much hype and hope around it, the match had been very much a non-event until the final 10 minutes.

The Blues for the better part of the contest appeared flat, failing to stamp their supremacy. Not even a best-on-ground performance by Justin Emery in his 150th senior match could lift his side as it stood shell-shocked at what played out.

Trailing by seven points at the final change, the Bulldogs cut the deficit to two with a snap shot goal.

Rohan Diamond, captain Chris King and Dale Fleming got the quick response from the centre clearance as the Blues extended the lead. It was followed by another as Emery kicked the ball on the run to Jake Power in the forward 50, Power found Reid, whose shot from directly in front scored true.

Sale City’s Nick Grainger added another goal to his tally after a free kick. It was followed by another to the Bulldogs as neither side was able to break the shackles.

It took Emery to settle his side, running into an open goal after roving the pack to give the Blues an eight-point buffer before Jeremy Reid’s kick off the ground found the goals.

A run of luck then favoured the home side as Grainger added his second goal for the term to finish the day with four.

Tom Wilson provided the highlight of the final term. Having kicked a goal after the siren to give his side victory against Glengarry four weeks earlier, Wilson again showed he was a cool customer under pressure.

Intercepting a Blues’ wayward kick-in, Wilson marked directly in front 20 metres out. His shot at goal handing the home side a one-goal lead.

HAVING led by four goals 10 minutes into the final term, Traralgon-Tyers United would be ruing the one that got away against third-placed Heyfield.

Leading by 17 at the first change, the Bombers looked on song early with Des Brunt and Dylan Loprese getting plenty of the ball in the forward 50.

The visitors fought back hard in the second term, kicking three goals to one to reel the margin back to four at the main break.

The Bombers rallied in the third term to establish what appeared to be a match-winning three-goal margin.

The home side booted the first goal of the final term before the Kangaroos’ purple patch, which saw them boot five unanswered majors to win 10.15 (75) to 9.12 (66).

Matt Millar and Michael Delaney stood up in front of goals, while Daniel Brown was named best-on-ground for the victors. Callum Laurie-Rhodes was the Bombers’ best.

AN eight-goal to one first quarter was the impetus for Churchill’s win against Boisdale-Briagolong.

Rebounding from last week’s loss to Heyfield, the Cougars put on an impressive opening term. The script continued along the same way in the second term, led by Dale Paterson (10 goals) and Joey Whykes (five) in front of goal, the Cougars booted eight majors to take a massive 103-point lead into the main break.

The Cougars won 29.14 (188) to 4.8 (32) with their midfield depth proving to be the difference. Christopher Williams and Brandon Mahoney created plenty of play, while defender Jarrod Broadbent was instrumental in restricting the Bombers’ impact in their forward 50.

Owen Sim and Luke Hedger were solid performers for Boisdale-Briagolong.

Led by Matt Cameron, who kicked four goals, the Saints were simply superb as they made it four wins from the past five rounds.

The visitors kicked seven majors in the first quarter before finding the going tough in a low-scoring second term. But it wasn’t long before the Saints continued the barrage in front of goal, piling on 15 majors to four in the second half to cruise home 124-point victors.

Jordon Bourke was a stand-out for the Saints, while Lee Cooper was a solid contributor, relishing his opportunities in the midfield.

SIX goals from Josh King led Glengarry to its third straight victory over Gormandale on Sunday.

The Tigers troubled the home side in the first half, trailing by only two goals at the main break. However, the Tigers struggled to maintain that intensity in the second half as Glengarry coach Ryan Potter led from the front, King proved a handful for the Tigers’ defence and Lachie Little continued his stellar form.

Gavin Swan stood-out for the Tigers, while Bobby Pacunskis proved he could still match it against a strong midfield.