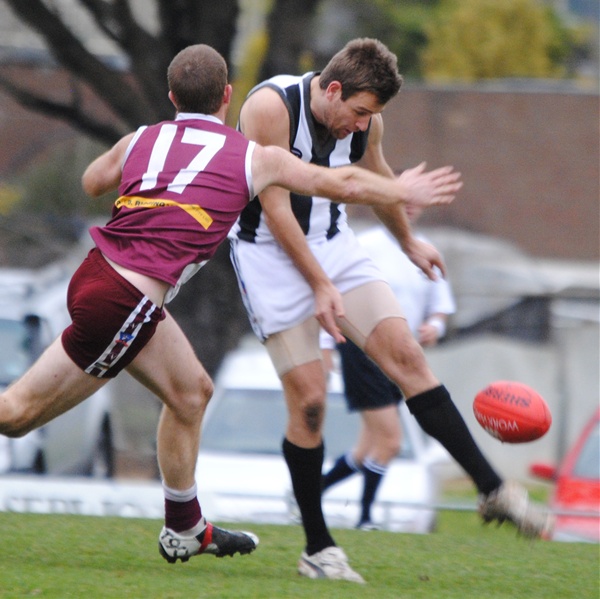 FOLLOWING a below par first half performance and only a narrow half-time lead, Gippsland League ladder leader Sale moved into top gear after the main break to score a 67-point win at Traralgon.

Sale’s younger players were hardly sighted in the first half, but after the main break, the Magpies were a different outfit with centreman and regular Gippsland Power player Shannen Lange leading the way. The younger Magpies attacked the ball much harder and suddenly emerged as match winners.

Sale had a focal point at full forward with Matt Ferguson, who is double teamed every week, kicking six goals. Ferguson was too good for Traralgon full back Jamie Aitken, who was moved off him.

The desperate Maroons, needing a win to keep their double chance aspirations alive, fought hard all day but were unable to match the much taller and faster Magpies.

Traralgon’s Lee Stockdale and Josh Jennings, who contributed six of their eight goals, kept the Maroons in the game early. Other good contributors for the Maroons were Adrian Slottje and Jordan Sandy, who battled away against the odds.

Traralgon follower Jayden Steers had the better of the first half hit-outs, giving the Maroons the edge in clearances, however Steers’ effectiveness was eclipsed when Sale’s Dylan McLaren and Jack Lipman took control in the second half to give the Magpie midfielders the upper hand.

Despite some untidy disposals early on, it was the 12th time this season the Sale defenders have kept the opposition to 10 goals or less. The Magpie defenders, led by the consistent Chris Laverty, continued to run off their opponents and set-up scoring opportunities.

A melee broke out early in the final quarter when Sale’s Joel Wallace, playing his 50th game, was felled in an ugly incident. The Magpies immediately responded with six unanswered goals to set-up a match-winning lead.

The Sale reserves had a comfortable 68-point win, but Traralgon was too strong in the under 18s and 16s.