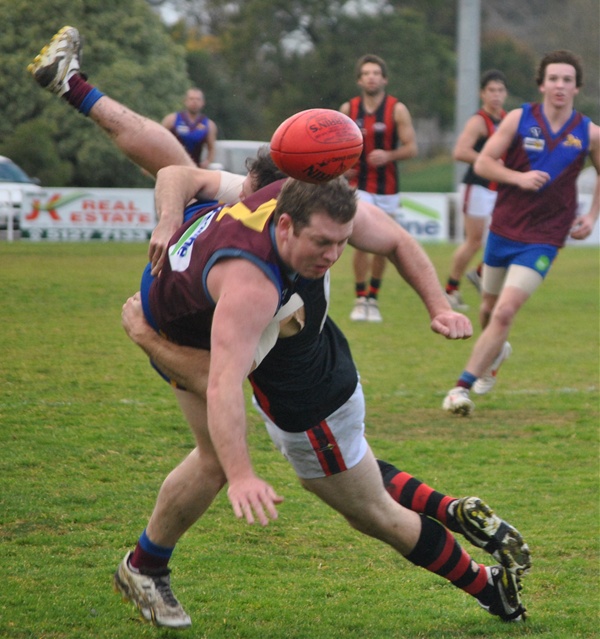 Jackson Scott has continued to show improvements since making his senior debut in round 10. His use of the ball was outstanding and he worked well alongside Kel Porter and Hayden Burgiel.

Following injury and trip to watch the Tour de France, Ben Coleman made a welcome return to the line-up with another valuable contribution.

Despite some inaccurate kicking for goal, Daniel Bedggood stretched the Lions defence, finishing with five goals, while Sam Walker performed well in the back line.

During a scrappy start, Moe challenged the Eagles, running the ball well out of defence as the visitors wasted good opportunities to kick goals.

The visitors led by seven points at the first break, but had seven more scoring shots. The Eagles were unable to adjust for the slight breeze across the ground.

The Eagles found their groove in the second term, beginning when Sam Tudor set up Coleman’s goal.

Maffra’s efforts to play man-on-man and be harder at the ball were paying dividends as Porter extended the lead to 21 points.

A strong tackle by Joel Lambourn was rewarded with a free kick, through which he booted another goal.

Bedggood out muscled David Crook in the goal square before booting his third major of the day with the lead out to 33 points.

Goals to Gary Jones and Kal Killoran capped off a term which the Eagles didn’t concede a goal and extended their lead to 47 points at the main break which, in the greasy conditions, was a match-winning margin.

The Eagles kicked five goals to one in the third term to kill off any hopes of a Lions comeback before both sides kicked four goals in an even final term.

Maffra’s win puts the onus on fourth-placed Morwell, who will play at Sale next weekend to conclude the split round, to bridge the six-point gap.

The Eagles’ reserves won a low-scoring match by 30 points and also dominated in the junior matches.

BAIRNSDALE’S hopes of avoiding the wooden spoon received a boost when it overcame Warragul at home by 53 points.

In what was a good attacking match, James Gibbs booted seven goals and Mark Sellings four for the Redlegs, while Ben Hughes kicked seven for the Gulls.

Paul Bills and Xavier Ryan were solid in defence for the home side, who is now six points away from the battle to avoid the wooden spoon between Warragul and Moe.

AS expected, Leongatha defeated Drouin, but didn’t have things all their own way.

The Parrots led by 20 points at the first break before the home side fought back to trail by just eight points at half-time. In the mud at Drouin, the Parrots kicked four goals to two in the second half to win 10.16 (76) to 7.10 (52).

Chris Verboon and Tas Clingan were the Parrots’ best with Daniel Barrand the Hawks’ best.